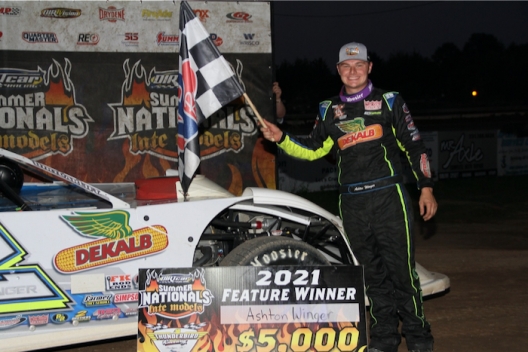 MUSKEGON, Mich. — The DIRTcar Summer Nationals is many things. Glamorous isn't one of them.

So after polesitter Ashton Winger swept Thursday's action at Thunderbird Raceway by setting fast time, winning his heat and then the $5,000 feature, he was asked in victory lane why he wasn't celebrating with a broom

"The only time we got the broom out today is when we parked in the mudhole," the 21-year-old Hampton, Ga., driver cracked.

So from the mudhole to victory lane, the sweeping Winger's night ended on the upswing as he captured his second tour victory, 10 days after his first-ever Hell Tour win at Knox County Fair Raceway in Knoxville, Ill.

Winger made an outside pass of fellow front-row starter Tanner English of Benton, Ky., on the 16th lap and built a comfortable lead in the caution-free 40-lapper to take the checkers 4.992 seconds ahead of series points leader Bobby Pierce of Oakwood, Ill., who started eighth at Thunderbird and also chased Winger to the finish at Knox County.

"I think we went a little bit different than pretty much everybody on tire. This place reminds a lot of Meridian, Miss., Whynot (Motorsports Park) and Seymour, Wis., out at Outagamie (Speedway). This place is badass," Winger said in victory lane, catching his breath to thank his sponsors and crew after his roof-pounding and steering-wheel dropping celebration. "This is awesome. I say it every time I get interviewed. I'm 21 years old and I get to run up and down the road and race and do what I love for a living around the people I love."

English settled for third behind Pierce while Jeep Van Wormer of Pinconning, Mich., who ran as high as third, for the fourth spot ahead of Travis Stemler of Ionia, Mich.

Winger's tire strategy played out to perfection on a series where teams are limited to five tires per night. The fifth tire typically means a new right-rear for the feature events, but Winger opted to change his right-front tire, putting on an LM-30, the middle hardness of three tire options to match his right-rear tire.

"We put a harder right-front tire on," said Gary Winger, the father and crew chief of the winner. "Most guys just put a new right-rear on, but we put a new right-front on. I just felt like steering was gonna be more important than traction. Late in the race when their steering went away, they had to whip the car to make it turn. When you do that you lose traction anyway. Sometimes it just works out."

Winger chased English through the race's early stages and felt his car improving heading toward the halfway point.

"I just think whenever my right-front tire fired, I could go about anywhere I wanted," the winner said. "I was a little worried on the start, because you know, any time they water the racetrack and you go a little bit harder (on tires), it's a gamble. But whatever, I moved around a little bit whenever Tanner had to move around some of (the slower cars), and I found the line that was good for me. Really I could maneuver all over, but I was lucky the cars fell the way they did. Shoot, three or four cautions there and we could be looking at a different scenario."

Pierce caught English by the 23rd lap but spent 10 circuits swapping the second position while Winger stretched his lead.

"Every time I had a run on Tanner and I was going to pass him, there was always a lapped car under us. So it kind of blocked my ability to pass him," Pierce said. "And that let Ashton have a big lead. I would've liked to have gotten by Tanner sooner. I think me and Ashton could've had a really good battle for the lead."

When Pierce got the second spot for good on lap 33, he was four seconds behind Winger.

"With all that time messing with Tanner, by the time I got by him, I was like, 'All right, where's the leader.' And (Winger) was a straightaway ahead. I kind of missed my opportunity there," he adding, congratulating Winger on the victory. "Starting eighth is never good. It just put us too far back. It would've needed to be a 50-lapper for us to be able to catch the leader."

The series remains in Michigan on Friday for a $10,000-to-win event at Hartford Speedway, the tour's first visit to the track since 2017. Four more Michigan events are scheduled for Aug. 18-21 as the tour wraps up the longest points chase in series history.

Notes: Two Michigan drivers (Van Wormer and Stemler) finished in the top five of a series event for the first time since last year's race at Thunderbird when Dona Marcoullier and Brandon Thirlby were in the top five. ... Former series champion Jason Feger of Bloomington, Ill., missed his first tour race if 2021; he stood fifth in series points heading to Thunderbird.

Polesitter Ashton Winger of Hampton, Ga., is chasing his second career DIRTcar Summer Nationals victory. Winger, Thursday’s overall fast qualifier, won the third heat and then drew the pole position in the redraw. “My car’s pretty good right now, pretty maneuverable,” said Winger after his heat win. “I think the biggest thing is keeping up with the racetrack.” … Tanner English of Benton, Ky., did a little experimenting during hot laps and found it to his liking. The fast qualifier in the first group won the night’s first heat. “We feel pretty good right now. We tried something in hot laps and it worked, so I guess we’ll just stay with it … maybe go a little bit more and try to (beat) that 32 car (Bobby Pierce),” said English. … A pair of Michigan natives occupy the second row, third-starting Travis Stemler of Ionia and fourth-starting Jeep Van Wormer of Pinconning. … Van Wormer has 15 career series wins, but hasn’t won a Summer Nationals feature since July 11, 2010 at Quincy (Ill.) Raceway. Van Wormer was happy to win the final heat. “(The track is) really tricky. I’m a little tight in the center there. It feels pretty darn good to get out here and get a win,” said Van Wormer. … Stemler said locals have to step up their effort when the Summer Nationals come to town. “You really gotta bring your ‘A’ game. Them guys are so good,” said Stemler. “The car’s really great. Hopefully we can give these Summer Nationals guys a run for their money tonight.” … Series points leader Bobby Pierce of Oakwood, Ill., starts eighth, but it’s not his worst starting spot of the season. He’s started worse three times: 10th at Kankakee, ninth at Fairbury and 19th at La Salle. He finished third, fifth and ninth, respectively, in those three events. … Chad Finley of East Lansing, Mich., was battling for second in his heat race when contact with Dona Marcoullier of Houghton Lake, Mich., sent him into the wall ending his night.