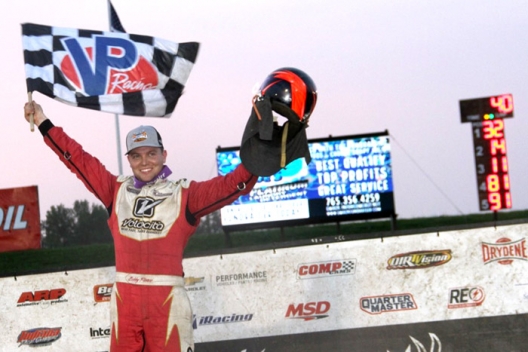 Continuing his winning ways on the DIRTcar Summer Nationals, the 24-year-old star from Oakwood, Ill., was unstoppable in gliding to a runaway victory Wednesday in the circuit’s 40-lap debut at the brand-new 3/8-mile oval outside Indianapolis.

Just over a month after finishing a quiet 12th in a World of Outlaws Morton Buildings Late Model Series event that marked the track’s first action, Pierce set fast time, won his heat and dominated the entire distance off the pole. He beat Joe Godsey of Edinburgh, Ind., by 7.145 seconds — a half-track margin — to earn $5,000 for his series-leading eighth triumph through 17 races this season.

“Coming here to race for the World of Outlaws show was kind of everything for tonight,” Pierce said. “I say it all the time, you gotta get your good qualifying runs in, and we did that tonight. I think running here the last time really helped that.”

The 10th-starting Godsey was in a different area code from Pierce at the checkered flag, but he was riding high after a late-race charge landed him a Summer Nationals career-best runner-up finish. He nosed out Spencer Hughes of Meridian, Miss., who ran second for most of the distance, by a mere .125 of a second.

Hughes settled for a third-place finish, also a career-high in Hell Tour action for the driver of Craig Sims’s Hope, Ind.-based PPC Motorsports machine. Tanner English of Benton, Ky., finished fourth after engaging in a three-wide battle for second with Godsey and Hughes down the stretch and third-starter Rusty Schlenk of McClure, Ohio, completed the top five.

Pierce struggled to get ahold of a choppy Circle City surface in last month’s WoO show, but he had no trouble handling Wednesday’s much improved conditions. He brushed off an early threat from Hughes and never looked back in a race that was slowed just once, on lap 15 for Jeff Roth’s spin between turns one and two.

“This track was a tough one the last time I was here,” Pierce related. “It was a lot different this time around. We were all scrambling back there in the pit area deciding which tire we were on, and I think we chose right.

“There was definitely a huge change on this track compared to what it was the last time I was here. It really impressed me a lot tonight. The top came in, and I think if I started a little farther back I could’ve really maneuvered around and got to the front.

“So big thanks to everyone with the racetrack,” he added. “They did a heck of a job.”

Pierce used the knowledge he gained of Circle City last month to his advantage as he continued his super Summer Nationals campaign.

“Even though the track was so different (in June), knowing the shape of the racetrack is huge — where the wall comes in, where it comes out, where the infield is, just the entire shape of the track,” said Pierce, who padded his points lead with his a victory that moved him within two triumphs of his career-high 10-win Summer Nationals season in 2016. “You get the feel of the banking, and where it might dip and where it doesn’t. You can really use that to your advantage.

“I’d say we got a handle on it now. We were pretty bad when it was really rough that one night. This track here just fit me really well. There was just enough traction everywhere and the track was really great until the last few laps (when) it took a little rubber.”

Pierce said the win “means a lot” because it was his 35th career Summer Nationals win, tying him with Brian Shirley for fourth on the circuit’s all-time win list. He trails only top winners Shannon Babb and Billy Moyer (100 victories) and Don O’Neal (39).

“We got a long way to go before we catch Babb or Moyer,” Pierce said, “so we gotta get these W’s.”

Godsey’s second-place finish continued the momentum he gained with a fiftth-place run in last Friday’s feature at Farmer City (Ill.) Raceway. He earned his runner-up money, too, using the inside line to march forward from the 10th starting spot.

“The track seemed to clean off on the bottom and we rotated really well,” Godsey said. “I seen a lot of guys scootin’ the right front (tire) so I was trying to keep ours underneath me for as long as I could and I think that paid off at the end.

“We kind of had a gameplan around the middle or bottom. If we caught traffic we’d go where we had to but we were gonna wait until we had to get up there (around the top).”

Godsey would have liked a late-race caution flag so he could test his speed against Pierce, but he was certainly satisfied with his result.

“I really don’t know … once we got to second Bobby was pretty much gone,” Godsey related. “I’m not sure what lap times look like and the comparables. We’ll never know. Of course you want to win races, but to pass cars it was a good night.”

The 20-year-old Hughes remarked that he though “we had a good car at the beginning of the race especially,” but he felt his decision to go with a softer-compound tire likely cost him speed in the late stages.

Series leader and Wednesday’s polesitter Bobby Pierce of Oakwood, Ill., is chasing his eighth DIRTcar Summer Nationals win of the season and 35th of his career. A victory would tie him with Brian Shirley of Chatham, Ill., for fourth on the tour’s all-time win list. … Shirley, who is third in series points, isn't competing Wednesday at Circle City. … Pierce is making his second appearance at Circle City. He finished 12th during the World of Outlaws Morton Buildings Late Model Series visit on June 12. Pierce said that prior experience helped him during qualifying, even though the track is considerably different from the WoO event, which was contested on a treacherous, heavy track. “The track looks a lot better than the last time I was here, so thanks for that,” said Pierce. … Second heat race winner Devin Gilpin of Columbus, Ind., has never won a Summer Nationals feature. Gilpin, who will start on the outside front row, said he was thankful to have a Summer Nationals event so close to home. Gilpin lives about an hour away from the Marion County Fairgrounds. … Rusty Schlenk of McClure, Ohio, who won the third heat, is making his first series start of 2021 and first-ever visit to Circle City. “(The track is) different for sure, but I have a pretty good track record at new racetracks. You just gotta get up on the wheel and drive,” said Schlenk. … Schlenk has two career Summer Nationals wins, both in 2010. His first-ever tour victory came in Indiana exactly 11 years ago: July 14, 2010 at Kokomo Speedway. His other victory came in his native Ohio. … Hall of Famer chassis builder C.J. Rayburn of nearby Whiteland, Ind., is among those attending Wednesday’s event. The ageless Rayburn was making his rounds through the pit area on a side-by-side. … Rob Mayea of Bend, Ore., was a late entry on Wednesday, once again giving the tour two drivers from the Beaver State, joining 2021 tour regular Thomas Hunziker of Bend. Both drivers raced their way into the feature via the third heat.