Information provided by: Series and track reports (last updated July 11, 9:02 am)
Hanging on at Jackson, Erb wins one for late pup 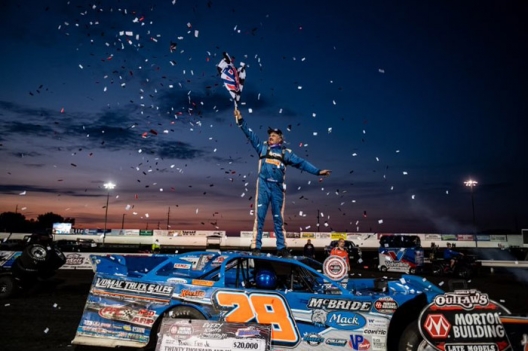 The 48-year-old Carpentersville, Ill., driver survived challenges on late-race restarts after dominating most of the way Saturday at Jackson Motorplex for a $20,000 World of Outlaws Morton Buildings Late Model Series victory that he dedicated to his white fluffy dog that was a loyal racing companion for so many highway miles.

"I lost my little buddy just the other day, my little dog who has been (traveling) up and down the road with me for about 13 years," Erb said, his voice cracking. "This one's for him tonight."

Winning his second WoO race of the season and eighth of his career, Erb had a near-half track lead before halfway, and stretched his margin to more than six seconds with 10 laps remaining. But four late restarts made things exciting — too exciting for Erb — as series points leader Brandon Sheppard briefly edged into the lead on the 48th of 50 laps.

Erb, who started outside the front row, fought Sheppard off and took the checkers 1.048 seconds ahead of Frank Heckenast Jr. of Frankfort, Ill., Friday's $10,000 winner at Jackson. New Berlin, Ill.'s Sheppard gave the Prairie State a sweep of the podium in third while Chris Madden of Gray Court, S.C., and polesitter Cade Dillard of Robeline, La., who held the second spot most of the race.

"We just kept working on this car ... the racetrack was in good condition and I could roll right through the middle," Erb said. "This Rocket car was awesome here tonight. We've just kind of been working on our own little deal, working on it each week, and things are finally clicking here, been running real good.

"I was kind of worried about tires a little bit, but we had a pretty good lead. We were able to slow down a little bit. I did not want to see those cautions at the end there. We definitely had to work for that."

Heckenast was concerned about tires, too, and wondered if that might have backfired in his pursuit of a weekend sweep.

"We all killed tires all night long, so I think we were all being conservative. Dennis was definitely better than all of us. I fell back to fifth and then Sheppy was showing us where to go (on the high side)," Heckenast said. "Our tires look brand new (after the race), so I'm kind of mad at myself that I didn't push it a little bit harder, but second's great."

Sheppard, who ran sixth most of the race, got rolling on the high side on a series of late restarts and held the second spot laps 45-49 before settling for third. The Rocket Chassis house car driver, who has two points victories in 2021 after winning 14 last season, didn't want to settle for anything less than a victory.

"We were good. It took us a while to get going there. We had to let the track get slick and let the top get good there before we really got rolling. But all in all, another good finish for us," he said. "Definitely not what we wanted. We want a couple of spots better and we're getting closer every night, and I feel like we're right on the cusp of being up there every night. We've just gotta keep plugging away and keep digging."

Six cautions slowed the 50-lapper, the first one on the second lap when Ryan Gustin of Marshalltown, Iowa, who finished third in Friday's feature, went up in smoke while battling for fifth and retired to the infield with apparent engine problems. The second caution appeared on the 19th lap when Chad Simpson got into turn-two berm and spun at the top of the backstretch.

Notes: Erb scored his richest victory since a $20,000 payday in the unsanctioned National 100 at East Alabama Motor Speedway in Phenix City, Ala., in 2016. ... Eleven drivers were running at the finish. ... The feature started about 9 p.m., just before dusk with the checkers falling about 9:30. ... A.J. Diemel of Elk Mound, Wis., entered in Minnesota driver Chad Olsen's No. 10c and retired after six laps. ... the Repairable Vehicles.com Tri-State Series competed on the undercard with reigning series champ Blair Nothdurft doing double duty between both series.