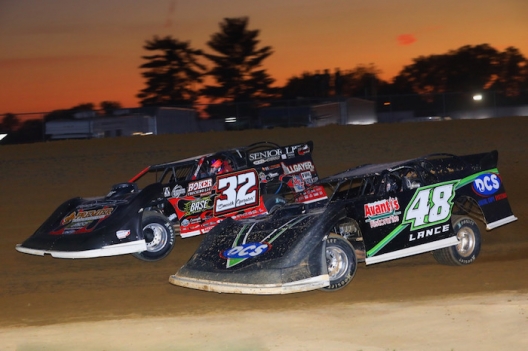 Lance, the Brimfield, Ill., driver looking for his first series victory, slipped under the race-long leading Pierce on the 19th lap, but Pierce got rolling again on the outside and regained the lead on lap 22, leading the rest of the way with Lance and eventual runner-up Devin Moran of Dresden, Ohio, hot on his heels.

Moran ended up 0.521 seconds behind at the finish with the eighth-starting Lance in third. Tanner English of Benton, Ky., was fourth followed by former track champion Devin Gilpin of Columbus, Ind.

Four-time and reigning series champ Brian Shirley gained three spots to finish seventh while polesitter Billy Moyer Jr. of Batesville, Ark., fell from contention on a lap-nine restart when he slipped over the backstretch, dropping to ninth from his third-running position. He ended up 10th.

"Man, that was a battle. I was kind of a sitting duck, I felt like. Man, every lap I was watching my dad on the backstretch (providing signals)," Pierce said "That was a race. I was pretty nervous. I didn't think we were going to hang onto it. About lap 10, I was kind of feeling like I was struggling, so I knew 30 laps to go it was going to be a long race."

Pierce, who notched his 28th career series victory to tie Scott Bloomquist for fifth on the all-time list, wasn't even certain which driver had overtaken him mid-race.

"Who was in the 48? Was that (Bob) Gardner?" Pierce asked in victory lane. "Oh, that was Lance, OK. Man, that's good for him. He did a heckuva job and I think Devin got second there."

"Big thanks to my crew guys. They worked their butts off," Pierce said. "We worked until 1 a.m. last night. We had to put a rear clip on this thing from Eldora. We got that taken care of."

Moran, like Pierce, was searching the track for the fast way around but couldn't quite catch the winner in the closing laps.

"At the start the bottom was greasy, and then the bottom came end and (Lance) rolled right up by all of us. Then we blew that back off some and (the fast line) just kept moving around. When racetracks are like that and you move all over and there's grip you've gotta chase, it makes it a lot more fun and a little more dependent on the driver," Moran said. "I wish I would've cleaned the top off a little sooner. I waited too long for those last two laps."

Lance, who scored his best-ever Summer Nationals finish in an MB Customs car that fellow Illinois driver Jason Feger prepared for him, tried to slow down after getting the lead to take care of his right-rear tire, the softer of two compound choices. He wondered if a different line might've helped him hold Pierce off after he grabbed the lead in the groove.

"I think if I could've started going in (the corners) a little bit higher, then coming off back down on the bottom," said Lance, who made his first start since January at FK Rod Ends Arizona Speedway near Phoenix. "What I started doing was I was going in harder across the bottom and I was kind of sliding out in the middle and actually getting out of the traction. I started actually running harder and harder coming off (the corners) and I was getting out of my groove. Hopefully we're going to run a lot of these races and hopefully the driving gets back to me and I make better decisions in the near future."

The 40-lapper was slowed by four cautions, including a pair of multicar incidents in turn four. Thomas Hunzicker, Britan Godsey and Tim Lance Jr. were part of the lap-eight yellow while on lap 14 Jason Feger, Jeff Roth, Richard Frost, Dean Carpenter and Britan Godsey tangled to create a cloud of dust.

Notes: Pierce's previous series victory came July 19, 2020, at Randolph County Raceway in Moberly, Mo. .... Third-place finisher Tim Lance was seeking his biggest payday since a non-touring $5,000 victory on May 28, 2006, at Dubuque (Iowa) Speedway. ... Wisconsin driver Mitch McGrath, who plans to tackle the entire tour, ran as high as second but ended up eighth. ... Besides being part of the lap-14 caution, sixth-starting Jason Feger slipped over the turn-four banking on the first lap and crossed the stripe in 18th. He completed 40 laps and finished 14th but never threatened to crack the top 10. ... Runner-up Devin Moran plans to run the first week of series events.

Oakwood, Ill., driver Bobby Pierce took advantage of a mid-race caution to get by Columbus, Ind.’s Devin Gilpin in the first heat. “He kinda changed his line a little bit and I think it kinda messed him up, so we got the dub,” Pierce said. … Arguably one of best heat races of the season — perhaps the best race period — Billy Moyer Jr. of Batesville, Ark., and Tanner English of Benton, Ky., ran side-by-side for 10 laps before Moyer eked out a win. Moyer’s outside line delivered a 0.273-second victory over the low-running English. “Tanner left me a lot of room and ran me clean. It’s nice racing with people like that. If we can run side-by-side like that all month, that’ll be fine,” said Moyer. … Heat three winner Devin Moran of Dresden, Ohio, who won his heat over Jason Feger of Bloomington, Ill., by running on the top, thought that the winning grove in the feature would likely be in the bottom once track officials “move them yuke tires in.” The infield tire barriers were pushed out during the heats in hope that the track would not become bottom dominant. … Ashton Winger of Hampton, Ga., was scheduled to start second in the third heat, but engine woes during qualifying forced the youngster to go to a backup car. He started last in the heat and finished fourth. … Tuesday’s Summer Nationals opener drew and eclectic field of competitors, with the 24 entries hailing from 11 states. Southern states were well represented, but Illinois led the way with seven drivers, followed by Indiana’s six. There were two drivers each from Arkansas and Mississippi, with one each from Kentucky, Georgia, Tennessee, Michigan, Ohio, Oregon and Wisconsin. … With Trent Bailey of Bedford, Ill., unable to continue, officials elected to forego the consolation race and start all 23 cars remaining.