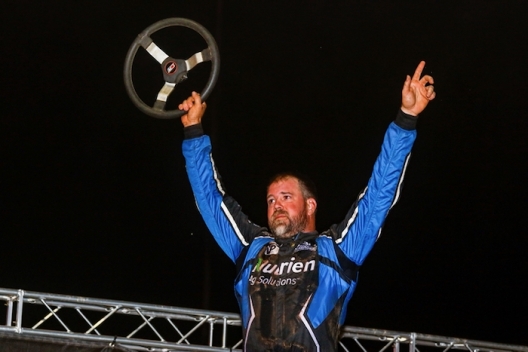 The 37-year-old Blairsville, Ga., star rolled a left-rear tire off the rim in hot laps, then failed to top the field in time trials. And despite winning a heat race, Davenport modestly settled into fourth place early in the 50-lap finale with Devin Moran dominating early.

But as the laps clicked down, that glimmer of hope began to fade as Davenport methodically moved up the charts and began to challenge Moran in the second half of the race. The second-running Davenport appeared to simply be sizing up Moran for the winning pass when Moran’s lap-34 flat right-rear tire ended any drama.

Davenport inherited the top spot and cruised the rest of the way at the 5/8-mile oval in his Lance Landers-owned Longhorn car. Despite feeling under the weather all day and into the racing program, he added Saturday’s $25,000 payday to Friday’s $10,000 haul for a whopping $35,000 weekend as he stayed perfect at the reopened WVMS in 2021. (Davenport picked up an $8,000 victory at WVMS on April 25).

The winner might not have felt that great physically, but he was healthy enough to prove once again he’s the best driver at the picturesque oval with the terraced hillside packed with approving fans.

“I ain’t going to give no excuses,” Davenport said about not feeling well. “My guys never gave up on me, they worked their asses off this week, so I was just going to repay them” with the victory.

And he did, taking the checkers in the main event 3.502 seconds ahead of runner-up Gregg Satterlee of Indiana, Pa., while Dresden, Ohio’s Moran came back to finish third after his blowout with 16 laps remaining.

Tyler Erb of New Waverly, Texas, overcame two problems — one on lap 26 for a broken right-rear wheel cover and the next on lap 38 for a flat left-rear tire — to finish fourth after pressuring Moran for the lead early in the race. Matt Sponaugle of Wiley Ford, W.Va., who joined the WVMS field Saturday after competing at Bedford (Pa.) Speedway the previous night, rounded out the top five as the first driver finishing one lap down in the caution-plagued affair.

After starting from the pole position and leading from flag-to-flag on Friday, Davenport took a different path to victory lane in Saturday’s 50-lapper. He started sixth and employed a patient approach in his advance to the front.

“We just wanted to put some tires on that were probably not gonna be the fastest thing but could last, because it was just gonna be attrition,” Davenport said. “I don’t think I could’ve run too many more laps last night with the tires I had on because they were tore all up. We went a little harder (with his team’s Saturday tire compound choice), and we cut ‘em and siped ‘em so they wouldn’t tear up as much.”

Davenport slipped past Scott Bloomquist of Mooresburg, Tenn., for third while working by a lapped car on the 14th circuit and powered past Erb for second with an inside surge through turns one and two on a lap-21 restart. He drew close to Moran, who started from the pole, but wasn’t sure how he was going to overtake the pacesetter.

“I could run with Devin, and then I could run just a little bit below him,” Davenport said. “But he was gonna have to mess up or something happen, which it did and I hate it for him. But it was good for us.”

Davenport spent the remainder of the distance hoping to avoid the same fate as Moran.

“Oh, yeah, sure, because when we were here before we had two flats. We had a flat in hot laps tonight too,” said Davenport, who recorded his 14th overall triumph of his already spectacular 2021 season. “You just try to run where you think they’ll be less rocks … and just how we cut our tires I think helped in that situation.”

Satterlee, 36, started and finished second, but he slipped as far back as sixth at one point in his family-owned XR1 Rocket car. His race got off to a rough start when he lost two spots at the initial green flag.

“Moran slid me (in turns one and two) … whatever,” Satterlee said. “I got knocked out of the hole over there (between the corners) and had to about stop.”

“I guess I’ll say, there needs to be a little give-and-take at the beginning, and unfortunately with just some guys, there’s not much give,” said Satterlee, who ceded two more spots on a lap-six restart. “Some of them guys are just way more out of hand at the beginning of those races than I think they should be.

“Ultimately, it had no change on the outcome of the race. Davenport’s just better.”

Satterlee left satisfied with his second runner-up finish in as many nights.

“We had a good payday,” Satterlee said. “I wish we were a little better, but we’re not bad. I feel like we’re pretty good, but at no point could you really race. You to just ride and take advantage of everyone else’s misfortunes and try to keep air in the tires. For a lot of that race I was just trying to ride as easy as I could and try to keep up. It’s pretty hard.

The 26-year-old Moran, meanwhile, experienced yet another heartbreaker at WVMS. He kept his Tye Twarog-owned Longhorn car in the lead until suffering a blown tire on lap 34.

“It just happens — just rocks (in the surface),” Moran said of his flat. “They’ve gotta do something (with the track) or they ain’t never gonna have cars here. It’s just getting frustrating at this point.

“I really wasn’t going that hard. I knew J.D. was close, but I wasn’t wide-open going full hard because I knew that (a cut tire) could be a possibility and it still did it.

“I don’t know … J.D. must have some good luck or something, because we’ve been here three times (this season) and I’ve had three flats and he hasn’t had any flats in the feature. Maybe he put some slime in it or something. I need to figure it out.

“It’s just freakin’ frustrating to lead 30 laps or whatever,” he added. “We still finished third, but it don’t feel like that.”

Eight cautions slowed a race that saw eight cars running at the finish. Dustin Smith spun on the sixth lap in turn four and Dustin Sprouse’s car was spouting water vapor when he slowed and pulled to the infield on lap 16. The third caution appeared for fifth-running G.R. Smith slowing with right-front suspension trouble that resulted from a lap-six restart scrape with Erb off turn two.

The fourth yellow was for Erb’s first problem on lap 26 and then Dustin Smith spun in turn two for a lap-29 yellow. Moran’s flat on lap 34 slowed the action again, five laps before Erb lost a tire. The final caution appeared on lap 40 for Robbie Bostic's turn-four spin.