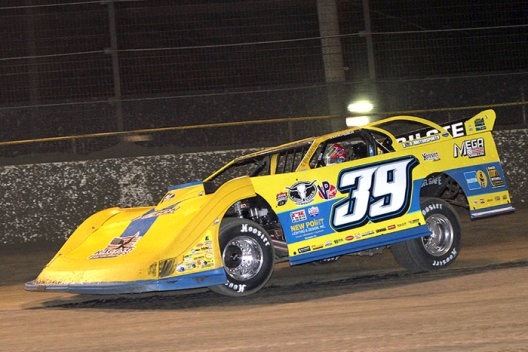 BARBERVILLE, Fla. (Feb. 8) — After winning the sixth heat race convincingly, Tim McCreadie said if Volusia Speedway Park’s D-shaped half-mile didn’t slow down a bit, Monday’s 30-lap feature would likely be ran with most cars hugging the thick cushion lining the track’s outside groove. Luckily for McCreadie, he started on the outside front row, because he was spot on.

McCreadie, of Watertown, N.Y., led all 30 laps to win Monday’s 50th annual DIRTcar Nationals opener at Volusia. He shot into the lead on high side on the opening circuit and stayed glued to the cushion for the duration, finishing 1.138 seconds ahead of fourth-starting Mark Whitener of Middleburg, Fla., for a victory worth $7,000.

“I kinda knew what to do,” said McCreadie. “Just lay on the cushion until somebody drives by you in a different lane. I kept seeing (crew chief) Phil Snellen. He gives me great hand signals.”

Snellen never had to worry his driver too much. Billy Moyer Jr. of Batesville, Ark., brought out the lone yellow flag when he slowed to pull into the pit area on lap 13, erasing McCreadie’s one-second advantage he’d built over Whitener.

On the restart, McCreadie quickly pulled away again, however, and — despite Whitener once trimming the lead to just under a half second — was never threatened in picking up his 13th career Georgia-Florida Speedweeks triumph and eighth at Volusia. It marked the first of 2021 for McCreadie, who last won at Volusia on Feb. 11, 2020 — last season's Tuesday night event.

“It’s always nice to get a win down here when you’re down South for Speedweeks,” McCreadie said. “I’m just lucky to do this. It’s not easy. Every one of us is trying as hard as we can out there and sometimes it’ll go your way. For now we’re gonna be happy. Tomorrow we know we gotta go back to work. I don’t do as much work as I used to.

“These guys, Matt, Phil my crew chief, J.C., they pick up all that slack. If I need to take a nap ‘cause I’m getting old, they tell me to do what I do and it results in wins and that’s all you can ask for when you’re down here. You give 110 (percent) and hopefully the car gives it back to you and tonight we’re fortunate to get both.”

McCreadie must have gotten his nap in Monday because the 46-year-old star raced unchallenged to victory with relative ease.

Whitener said in order to take the lead, he knew he’d have to find a better line than McCreadie was running, so he began to search around. After a short battle with fellow Floridian Bronson, Whitener began to chase McCreadie down. Following the caution, he managed to close to within a few car lengths, but never managed to get close enough to make a bid for the lead.

“I had to hunt something to pass him and I went to hunting something and found something that got me to second and it kinda petered out down there,” said Whitener. “I started losing the (back) of the car getting in the corner and I just couldn’t hang with him going through the corner on the top. At that point it got dominant up there so I had to get up there to him and I never could pull up to his bumper to pull a slide job on him. It was kinda treacherous to do one of them anyway. We’d probably be in the fence.”

With Whitener, one of the more aggressive drivers when trying to tame Volusia, opting not to throw a slider, there was little third-running Moran could do either.

“I was trying (the bottom) a couple times but the car would get so upset it felt like all four tires were off the ground.” said Moran. “Really that’s where you can pull a slider to get by them guys, but with the rain and stuff, that’s just part of it. I’m sure the track guys will have it fixed up and we’ll be good to go tomorrow.

“I wish we could have started on the front row to see what we could have give Timmy. But congrats to them guys and congrats to Mark. He moved around more than I did in the middle to early part of that race and that’s what got him up there. But all in all, we’ll take this Tye Twarog Racing Longhorn with a podium finish. I feel like we got some pretty good notes coming into tomorrow at least to start, so at least it’s somewhere to start.”

Notes: With his 13th career Georgia-Florida Speedweeks win, McCreadie moved to 11th all-time, passing Earl Pearson Jr., Darrell Lanigan and Hall of Famer Jeff Purvis. … T-Mac’s eighth career Volusia Winternationals triumph puts him in a tie for fourth all-time with Wayne Shugart, Jack Boggs, Don O’Neal and Brandon Sheppard. They trail Hall of Famers Billy Moyer (19) and Scott Bloomquist (12) and Josh Richards (10). … All but two of the 24 starters were running at the finish, with 18 completing all 30 laps. … Chickamauga, Ga.’s Dale McDowell was the first out of the race, completing just 13 circuits. … Scott Bloomquist of Mooresburg, Tenn., never fully got up to speed after qualifying 16th in Group B. Bloomquist, among the faster drivers in hot laps, was penalized for a suspension violation after time trials, stayed near the back of his heat and consolation race and was never close to challenging for a feature transfer spot. … Whitener’s runner-up finish likely helped ease the frustration he felt last month after earning an apparent feature berth in the Jan. 14, World of Outlaws program with a runner-up finish in his heat race, but failed postrace tech and couldn't transfer through a consolation race. He managed to bounce back and finish ninth in the Jan. 16 WoO main event.

The Super Late Model portion of the 50th DIRTcar Nationals opens Monday on a muggy, overcast evening at Volusia Speedway Park … Fifty cars are signed in to compete in the first of two DIRTcar-sanctioned programs. … UMP modified standout Nick Allen of Wheatfield, Ind., was on Monday’s initial roster after making a last-minute deal to run one of Kyle Strickler’s XR1 Rocket cars that PCC Motorsports has up for sale with Strickler returning to Longhorn machines, but he had to scratch from action because his height left him sitting too high in the seat to safely race. He said he is contemplating purchasing the Late Model … Strickler has his own Longhorn reskinned in PCC Motorsports colors but is bypassing Monday’s Late Model competition to concentrate on the UMP modified division’s Gator Championship finale. … Lucas Oil Series regulars who decided to remain in Florida to run the DIRTcar Nationals rather than head home as they originally planned are Devin Moran of Dresden, Ohio, Billy Moyer Jr. of Batesville, Ark., and Ricky Thornton Jr. of Chandler, Ariz. … Another Lucas Oil traveler, Hudson O’Neal of Martinsville, Ind., has his Double Down Motorsports mount in the pit area but plans to start his Volusia week on Tuesday. … Spencer Hughes of Meridian, Miss., is also waiting until Tuesday to enter the Late Model action; he’s running his modified this evening. … WoO regular Ricky Weiss of Headingley, Manitoba, is back in Florida with his self-designed Sniper Chassis that sustained significant damage when he smacked Volusia’s turn-three wall during last month’s WoO season-opening Sunshine Nationals. He put the car on a jig and replaced its rear clip at his partner J.R. Haley’s shop in River Falls, Wis. … Mark Whitener of Middleburg, Fla., will start the week driving his own No. 5 Barry Wright Race Car. … Josh Rice of Verona, Ky., is making his first-ever Volusia start in a Dirt Late Model, though he has competed at the track in the modified class. … Bobby Pierce of Oakwood, Ill., plans to run at least the first three nights of the DIRTcar Nationals. … DIRTcar Nationals stalwart Michael Norris of Sarver, Pa., is making his 2021 Speedweeks debut. … Reid Millard of Jefferson City, Mo., is racing after spending Sunday displaying his Dirt Late Model within sight of the front entrance at Tampa’s Raymond James Stadium, the site of Super Bowl LV. A Kansas City Chiefs fan, Millard decided to drive by the stadium on Sunday en route to Volusia and was stopped by the owner of the home that sits closest to the stadium; the man was a race fan and asked Millard if he’d like to park his car on his property and show it off to fans heading into the game.