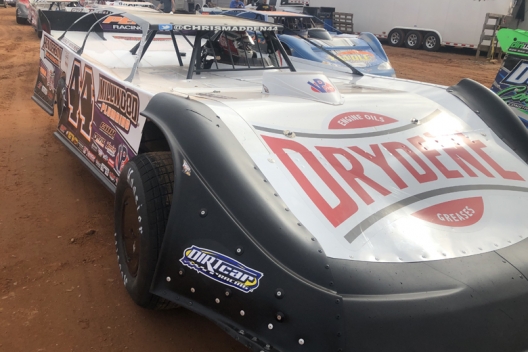 GAFFNEY, S.C. (Nov. 22) — At just the right time, Brandon Overton came to the conclusion that a single right-rear tire likely wouldn’t get a driver to the end of Sunday’s 30th annual Blue-Gray 100 at Cherokee Speedway.

That realization is what ultimately propelled the 29-year-old star from Evans, Ga., to victory in the event for the second time in three years.

“I knew I was being pretty easy on (his right-rear tire) and I had already started to get free getting in (the corners), so I knew it was gonna be wearing,” Overton said after capturing the $10,000 top prize in the race co-sanctioned by the Carolina Clash Super Late Model Series and Drydene Xtreme DIRTcar Series. “I didn’t want to chance it. If I wasn’t leading I was gonna come in and gamble (on a tire change).”

So it was that Overton relinquished third place during a lap-60 caution period to make a preemptive right-rear tire swap on his David Wells-owned Longhorn machine. He found himself racing well back in the pack — as low as 15th place — when the race restarted, but the decision soon looked prescient when car after car ahead of him headed pitside to change right-rear tires badly worn from the red clay oval’s abrasive daytime surface.

When Overton took second on lap 85 from Benji Hicks of Mount Airy, N.C. — the driver who brought out the lap-60 caution due to a flat tire and thus had right-rear rubber of the same lap count as Overton — only Chris Madden of Gray Court, S.C., remained ahead of him. But Madden, who inherited the top spot on lap 75 when race-long pacesetter Ross Bailes of Clover, S.C., had a tire go soft, was racing on borrowed time because he hadn’t pitted.

Finally, on lap 92, the door opened for Overton. Madden popped a right-rear tire in turn three and slowed to bring out the marathon race’s 14th and final caution flag just after Overton was scored the lead of lap 93.

The remainder of the distance belonged to Overton, who pulled away to defeat Hicks by 3.892 seconds. Kyle Strickler of Mooresville, N.C., who pitted out of fourth place on lap 70 to change a tire, rallied to finish third in his debut run with the PCC Motorsports team. Tyler Carpenter of Parkersburg, W.Va., placed fourth in the AirMax Motorsports mount after pitting during a lap-68 caution period while Brett Hamm of Newberry, S.C., who also pitted on lap 68, completed the top five and clinched his second consecutive Carolina Clash points championship in the process.

Bailes settled for a sixth-place finish after leading the first three-quarters of the race. Johnny Pursley of Clover, S.C. — the only driving to complete the century grind without changing a tire — finished seventh while Madden’s bid for a seventh Blue-Gray 100 victory ended with a disappointing 12th-place finish.

Overton’s 26th overall triumph of 2020 was arguably one of his most satisfying considering the strategy he employed to achieve it.

Hicks beat Overton through traffic, briefly even passing Madden to take second following a lap-72 restart while Overton ran fourth. When Bailes saw his hopes for a first-ever Blue-Gray 100 evaporate due to a flat tire on his Big Frog Motorsports car on lap 75, Hicks found himself sitting second, sandwiched between Madden and Overton.

Then Overton went to work, turning up the wick to slide underneath Hicks for the runner-up spot on lap 85. He was beginning to apply more pressure to Madden when the leader pulled up lame on lap 92.

“I knew if Madden could make all 100 laps (without a tire change), it would be pretty damn impressive,” Overton said. “But I didn’t think it was gonna happen.”

Hicks’s second-place finish was his best in three career Blue-Gray 100 feature starts, easily topping his 11th-place runs in 2017 and ’18. The race’s 19th starter benefitted from bad luck striking him at an opportune moment.

“I was trying to take it easy there at the beginning like everybody and keep the tires up underneath me,” Hicks said. “Logo, Darrell Lanigan’s crew guy (Adam Logan), and my brother-in-law, Brian, told me that I blew the tire at the right time (on lap 60). I went back out and was one of the ones with the freshest tires.

“I could pick a few off there on every other restart, and then the next thing I know I’m running up towards the front and guys up in front of me started blowing (tires) so I was just biding my time. (But) I couldn’t really push the issue there with about 10 to go, 15 to go. My right-front (tire) was gone and I think I started running out of fuel … it was cutting off in the corner.”

Strickler made his pit stop during a lap-70 caution period for Jonathan Davenport of Blairsville, Ga., whose brand-new Double L Racing Longhorn car sustained race-ending damage when a blown tire sent him into the backstretch as he ran in third place.

“I actually caught a lucky break and got a right-front flat when Jonathan got in the wall and that put us ahead of a lot of the guys for tire strategy there,” said Strickler, who passed Hamm and Carpenter following the lap-93 restart to reach third place. “It’s just how it is for day racing here at Cherokee. You know what you got. You just gotta use your head.

“I think that we’ve come so far with this Super Late Model stuff, and to be able to run these long races and tire management.”

Hamm, meanwhile, entered the Carolina Clash’s season-ending weekend doubleheader at Lancaster (S.C.) Speedway and Cherokee trailing Dennis Franklin of Gaffney, S.C., by 44 points in the standings. He closed the gap on Saturday night by earning qualifying bonus points and finishing second to Franklin’s seventh at Lancaster and then overtook Rambo to snatch the title with some dramatic late-race moments at Cherokee.

Franklin, who started seventh while Hamm took the green flag from 17th, had the upper hand in the points battle for a majority of the distance. But when a caution flag flew on lap 72 with Franklin sitting in fifth place — just two spots ahead of Hamm, who had pitted for a new tire four laps earlier — he knew he had to make a tire change as well to have any chance of surviving to the finish so he came in.

The new rubber allowed Franklin to mount a rally that brought him to seventh place — three positions behind Hamm — on lap 93. Franklin still had a shot to claim his fourth career Clash title if he finished within one spot of Hamm, but his hopes were dashed soon after the restart when apparent mechanical trouble caused him to struggle to a 13th-place.

“That’s all we wanted to do, is make it interesting,” Hamm said of his mindset entering the final weekend of Clash action. “We knew we made it interesting last night (at Lancaster) … we were really good last night and really took care of our car. Today we started and we were a little bit off and we just kept working real hard on it and played a little pit strategy there in the middle of the race and it paid off.

“We actually had a really good car at the end there so it’s not like we really lucked into it. We played everything like we should and the ball bounced our way, simple as that.”

Notes: Overton had another reason to be happy about his triumph: it came with his fiancee, Heather Curry, in attendance. “She’s been giving hell, saying, ‘Every time I come, you lose. Maybe I’m bad luck,’” Overton said with a laugh. … Hicks’s runner-up finish gave him a great start on the Drydene Xtreme DIRTcar Series, which offers a $15,000 prize to its champion at the completion of six races scheduled through the end of February. But while he plans to enter Xtreme shows next month at Bulls Gap, Tenn., and Lavonia, Ga., he said he won’t be running the last three because he and his wife will be awaiting the March birth of their son. … Bailes’s heartbreaking loss came in his ninth career Blue-Gray 100 feature start. His best finish is a second in last year’s event. … Carpenter’s fourth-place finish came in his first-ever Blue-Gray A-main appearance. … Mike Marlar of Winfield, Tenn., was eighth when he retired on lap 35 due to a broken driveshaft. He was driving an XR1 Rocket car his car owner, Ronnie Delk, purchased from Californian Tony Toste before the recent Cotton Pickin’ 100 in Columbus, Miss. … Lap 50 was rough for Zack Mitchell of Enoree, S.C., and Chris Ferguson of Mount Holly, N.C. Mechanical trouble forced Mitchell to relinquish fourth and Ferguson to vacate his spot just outside the top 10. … Christian Hanger of Winchester, Tenn., finished 18th driving Joe Denby’s second car after crashing his own machine in a heat the previous night at Duck River Raceway Park in Wheel, Tenn. … Twelve of the race’s 14 caution flags flew during its second half, extending the length of what appeared to be a rapid feature to 1 hour, 9 minutes.