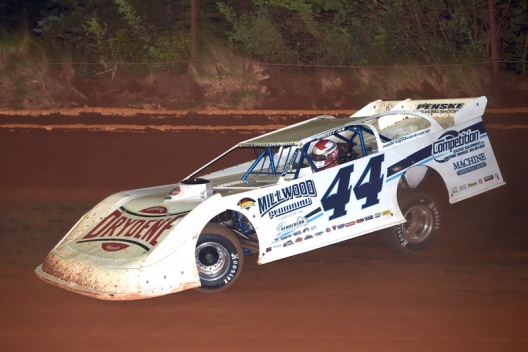 BRASSTOWN, N.C. — Chris Madden inherited the lead of Tuesday’s Schaeffer’s Southern Nationals feature at Tri-County Racetrack on lap 14. He made his winning pass, however, on lap 11. Madden, of Gray Court, S.C., inherited the point when race-long leader Ross Bailes of Clover, S.C., crashed while trying to negotiate slower traffic and went on to lead the final 21 laps to win his third Southern Nationals feature of 2020.

It was three laps earlier, however — on lap 11 — when Madden slipped by second-running Brandon Overton of Evans, Ga., putting the five-time series champion in the right spot at just the right time to take advantage of Bailes’ mishap.

Madden, who started fifth, earned $3,500 for his series-best 27th career Southern Nationals victory while snapping Overton’s four-race series win streak. Third-starting Overton finished 0.711 of a second behind him, while second-starting David Payne of Murphy, N.C., led the local contingent with a third-place finish.

Tyler Millwood of Kingston, Ga., Madden’s teammate since the beginning of the series, finished fourth, his best finish on this year’s tour, bettering the sixth-place run he had on July 14 at I-75 Raceway in Sweetwater, Tenn., and Jake Knowles of Rome, Ga., last year’s event winner at Tri-County, rallied from 14th to complete the top five.

The race was slowed by four cautions, none more crucial that the third one, when Bailes, who had led from the onset from the pole position, made contact with Tullahoma, Tenn.’s Joe Denby, who he was attempting to put a lap down. Bailes had his hands full trying to fend off Madden and Overton while also trying to find a way around Denby, who he had followed for a lap and a half, even pulling alongside him down the front straightaway.

When Denby slowed getting into turn three, Bailes simply couldn’t get turned far enough down the track. Bailes’ right rear wheel hopped up and over Denby’s left rear, with the rear of the leader’s car getting briefly airborne before they slid to a stop hooked together between turns three and four. With no place to go, fifth-running Donald McIntosh of Dawsonville, Ga., was collected in the melee as he slid hard into the left rear of Bailes’ car.

Madden, who had just pulled even with Bailes in turn two, ducked below the crash unscathed, while Overton went by on the outside. Both Payne and Millwood went to the top as well, with Payne getting a little contact from McIntosh and Millwood stopping just inches from the accident.

“I seen it when we went down the back straightaway what was gonna happen so I kinda backed up and give myself some room,” said Madden. “You know, Brandon was on the outside of me and me and him was having a heck of a race right there door-to-door. I appreciate (Overton) racing me clean. I tried to give him plenty of room and hopefully it put on a great race for these fans.”

The caution gave Madden both the lead and a clear racetrack.

“Always being out front in the lead is definitely a lot easier until you hit lap traffic and then you make the wrong decision and you’ll be running second or third,” said Madden. “We was good tonight and I think I would’ve been able to maneuver lap traffic real well. I could run the top or the bottom, so we had a great race car tonight.

“We just got fortunate and got in position to get by Brandon. We were definitely better than the 58 (Bailes). … Great race car tonight. This (Rocket) XR1 was definitely good tonight. We’ve been working on it and working hard. We’re gettin’ there … it’s just new to me and I’m having to learn it.”

Before giving up second to Madden in traffic on lap 11, Overton challenged Bailes for the lead. He pulled even with Bailes on a lap-three restart and they raced side-by-side down the backstretch and into turn three. But Bailes, who was on the outside, was able to power back ahead as they excited turn four, while Overton slid back behind him.

Once Madden grabbed the runner-up spot, Overton would’ve preferred the race stay green. Though his win streak was snapped, he registered a series-best ninth top-five finish. He hasn’t finished worse than third since his fourth-place finish in the series opener on July 10 at Smoky Mountain Speedway in Maryville, Tenn.

“You can’t win ‘em all,” said Overton, who has an average finishing position of 1.78 through nine events this year. “I didn’t need that caution. I had rolled to the outside of (Madden) when Ross and that lapped car got tangled up. But it’s all good. We didn’t tear anything up tonight and we’ll go on to Crossville on Thursday and see what we got for ‘em.”

Payne, whose best finish in three Southern Nationals appearances this year was 10th at Volunteer Speedway in Bulls Gap, Tenn., on July 13, was happy to be back at his home track and on the podium.

“We qualified well, but just gave up too much there on that start,” Payne said. “We just wasn’t quite as good early on as we needed to be. These two guys here (Madden and Overton) have been hot and they’ve been doing a lot of racing and (they’re) good wheelmen, so to come out with a third-place finish, we’ll take it.”

Notes: Twelve of the 22 starters finished the race, with 10 completing 35 laps. … After going to the rear, Bailes worked his way back to an eighth-place finish. … The first caution was for Danny Ledford, who lost a right rear wheel. … The second caution came out on the lap-three restart when two cars tangled in turn four. … Bailes and Denby were the third caution. … They final yellow waved on lap 26 when Jamie Oliver spun. … The series takes Wednesday off before picking up Thursday at Crossville (Tenn.) Speedway and then wrapping up Friday and Saturday at 411 Motor Speedway in Seymour, Tenn., and Tazewell (Tenn.) Speedway. “We’re looking forward to it. We like the weekend shows … (the) $10,000-to-wins,” said Overton.

Ross Bailes of Clover, S.C., continued to show good speed early in the night with his fifth fast time honor in nine events. Looking for his first series win of the season, Bailes — whose best finish is third three times — will start the Big Frog Motorsports mount from the pole position alongside David Payne of Murphy, N.C. … Payne is comfortable at his home track and looking for a bit of redemption after rolling his brand new Capital Race Car in the tour’s first race at Smoky Mountain Speedway. … Series leader Brandon Overton of Evans, Ga., is chasing his sixth win overall and fifth in a row. Overton hasn’t finished outside the top five. … Chris Madden of Gray Court, S.C., is making his first start at Tri-County in 14 years. Madden, who will start fifth, is looking for his third series win of 2020 and 27th overall. … Qualifying Group A was stacked on Tuesday with the series top five drivers — Overton, Madden, Bailes, Donald Mcintosh and Pearson Lee Williams — all drawing into the first group. … Both consolation races were relatively clean with the only incident coming in the second consy when Dalton Polston of Douglasville, Ga., got out of shape in turn one, collecting John Baker of Norman Park, Ga., who had no where to go and slid into him. Polston continued on, while Baker headed to the pits and will use a series provisional to join the 22-car starting field. … Brent Dixon of Elberton, Ga., made a last-lap pass to nip Jake Knowles of Rome, Ga., to win the second consolation. Dixon finished a scant 0.026 of a second ahead of Knowles. ... Craig Greer of Cleveland, Tenn., will use the second series provisional. … Three drivers — Gary McPherson, Cody King and Trevor Parker — scratched for the night and did not run heats. Both McPherson and King crashed during time trials. ... The lights in turns three and four and on the frontstretch went out at 9:39 p.m., just as the hobby division was starting its feature. It took about 16 minutes to get the lights back on and the feature started.

The second driver to take the track for qualifying, Ross Bailes of Clover, S.C., set the overall quick time, turning a lap of 12.766 seconds to earn the pole for Tuesday’s 35-lap main event. Bailes was one of only two cars among the 26 entries to get below 13 seconds. Series leader Brandon Overton of Evans, Ga., was the other at 12.971 seconds, the second quickest in Group A. David Payne, the likable basketball coach from Murphy, N.C., was the final driver to hit the track but still managed to turn the quick time in Group B, stopping the clock at 13.182 seconds. Gary McPherson of Chatsworth, Ga., and Cody King of McDonough, Ga., both ran into trouble during qualifying, with McPherson tagging the wall in turn one and King getting into the wall in turn four. The top five drivers from each group are locked into the feature, the the remaining 16 set to battle in two consolation races.

The Schaeffer’s Southern Nationals swing from Georgia into the western tip of North Carolina for the tour’s only stop in the Tar Heel state with a visit to series promoter Ray Cook’s track, Tri-County Racetrack in Brasstown. Tri-County hosts the series for the eighth time overall. It’s also the fourth state that series regulars will traverse during the 16th season of the Southern Nationals.

After sweeping all four series events in his home state, Brandon Overton of Evans, Ga., leads to tour to North Carolina. Overton grabbed the series points lead from Chris Madden of Gray Court, S.C., on July 17 at Needmore Speedway in Norman Park, Ga., and extended it with victories at Screven and Cochran. Overton has five wins, while Madden has two. Cory Hedgecock of Loudon, Tenn., who won at I-75 last week is the only driver who has managed to break the Overton-Madden stranglehold atop the podium.