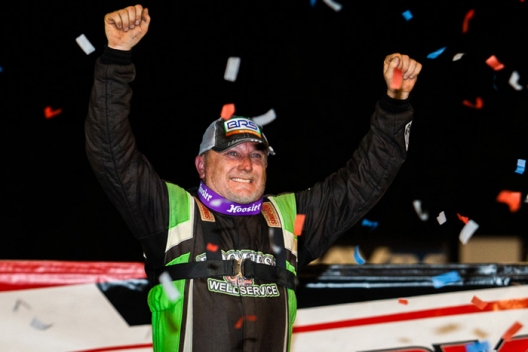 Wrapping up the three-race weekend with a $15,000 victory, the Newport, Tenn, driver added the five-figured triumph to his $5,000 preliminary victory on Friday and a runner-up finish in Thursday’s opener as Owens stretched his series points lead with more than $23,000 in earnings at Magnolia Motor Speedway.

“We were just this close to making it a sweep,” the three-time series champion told a record-setting crowd at the 3/8-mile oval.

In Saturday’s finale, Owens quickly recovered after dropping from first to third on the 16th lap, storming back to the lead seven laps later and leading the rest of the 100-lapper. Owens survived a lap-63 scare when Timothy Culp spun in front of the leaders and went on to notch his fourth series victory of 2020 after letting Tyler Erb and Shane Clanton pass him on both sides in the early going.

Clanton, of Zebulon, Ga., took a backstretch shot at Owens on lap 82, but couldn’t quite complete the pass. He pressured Owens late and finished a half-second behind at the checkers while Josh Richards of Shinnston, W.Va., after falling back as far as eighth. Thursday’s opening night winner Bobby Pierce of Oakwood, Ill., was fourth Erb, of New Waverly, Texas, settled for fifth after leading two laps early.

After the flurry of lead changes between laps 15-25, Owens cruised most of the way, building full straightaway leads and hanging on late amid traffic as the fastest line filtered to the bottom of the racetrack.

“The track was really, really great and they did a good job prepping this track, especially with this heat today,” Owens said. “But we had a great track to race on for the first, I don’t know, 70 laps or so like that, then it go to where you wanted to dread the traffic, because you didn’t now whether to go high or low or just follow ’em.

“We were good when the track’s slick like this, and we were fast all weekend not matter what the conditions. It’s just the hard work of the crew … and it pays off at the end.”

Clanton made contact with Owens in trying to fight past with 18 laps remaining, but Owens was able to settle back ahead just before the final caution flew.

“(The track surface) got cleaned up there (exiting) turn two and I think I found it before he did, because he was trying to pass some lapped cars and go to the outside,” said Clanton, who matched his best 2020 series finish in his first full season on the tour. “I got a good run and got beside him there, but it was so slick in (turns) three and four, and he got back in front of me. We rubbed a little bit …”

“We worked awful hard the past couple of weeks on our car and it shows that we’re getting better. We struggled last week, so we went back to work and worked all week and to come over here and do as good as we did this weekend, we feel pretty good.”

Richards, the 2017 series champ, started fourth but fell quickly from contention before working his way back into the top five with 35 laps remaining. He went from fifth to third on the lap-83 restart to earn a podium finish.

“We did not touch the car, and whatever he put in this racetrack, I couldn’t steer in a 10-acre field. I thought I was going to run 20th,” he said. “The track was so much different, I could not turn in (the corners) at all. Then as the race went on, and with the fuel burnoff, I could steer a little bit better and the track got a little bit of grip down in the corner when it rubbered up. I just tried to take advantage on some of those starts whenever we could.

Five caution flags slowed the action, all for single-car incidents.

The first yellow appeared on the 21st lap with Billy Moyer Jr. slowing and heading to pitside with left-front suspension damage, then home-state driver Spencer Hughes slowed for a lap-46 caution. The third yellow appeared when Timothy Culp spun in turn one just in front of the leaders and the fourth on lap 66 when series rookie Tyler Bruening went around. A final yellow appeared on lap 82.

Notes: Owens is atop the series points for the first time since 2014. … He’s on a streak of a dozen consecutive top-five finishes. … Stormy Scott pulled up in a cloud of smoke just before the green flag was about to fall and never completed a lap. … Jesse Stovall, who missed Friday’s action, was back on the track in his No. 00 on Saturday and got a Comp Cams provisional for the main event after dropping a new Scott Bailey powerplant into his car. He started 25th and ran as high as sixth before settling for eighth. … Johnny Scott made contact in taking a spot from Brian Rickman in a consolation race, and Rickman gave Scott’s ride a little bump on the cool-down lap.