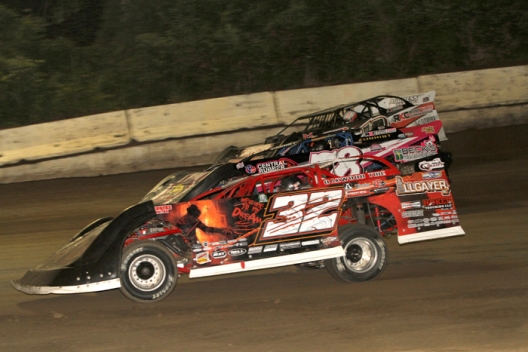 Pierce, of Oakwood, Ill., emerged from a three-way battle with Chad Zobrist of Highland, Ill., and Daryn Klein of Fairview Heights, Ill., to win his fourth UMP DIRTcar Summernationals race of the season Saturday night at Highland Speedway.

Battling the two local stars on their home turf, the third-starting Pierce muscled his way into the lead just past the halfway mark of the 50-lapper and went on to win his second tour event in three days.

Pierce beat Timothy Culp of Prattsville, Ark., to the finish line by 2.345 seconds, earning a $10,000 payday on a night when close-quarters racing was a necessity. Zobrist, who led early before giving way to Klein, finished third, while sixth-starting Gordy Gundaker of St. Charles, Mo., finished fourth. After leading a dozen laps in first half of the race, Klein slipped to fifth.

“Before the race I was talking to my dad and my crew guys and I was like, ‘I’m just gonna go out there and beat the wall down every lap.’ And they’re like, 'No no, just (Ryan) Unzicker it.' So I’m like, 'OK, I’ll just Unzicker that bottom line,'” said Pierce. “There for awhile I wasn’t sure that we were gonna be able to get through there. But they kinda fanned out a little bit and went to the middle, just barely left a little door open and I snuck under there to try to really pinch it off the corners and get that traction and luckily we ended up doing it.

“The car was awesome tonight and we’ve been working really hard. We’re always really good on these small tracks, so hopefully we can just keep it up.”

Pierce battled both Zobrist and Klein early in the main event, working the bottom side of the quarter-mile fairgrounds oval with unfettered determination. The three ran three-wide lap after lap before Pierce watched the two local standouts ease away.

Rolling on the top, scraping the wall with each circuit, Klein took the lead on lap six. Zobrist, in the middle grove, powered by on lap nine. By lap 11, Culp had joined the fray.

Four laps later Klein and Zobrist were dead even again. On the next lap Klein forged his way back to the front and abandoned the high side. Diving to the bottom after making the pass for the lead, Klein paced the next 11 laps.

Then Pierce began to reassert himself again. He slipped by Zobrist for second on lap 27 and wasted no time attacking Klein. On the next lap, Pierce muscled his way into the lead. Bouncing off of Klein as they exited turn four, Pierce immediately began to pull away.

“I have to give a big shout out to those guys for racing me clean,” said Pierce. “We were all just side-by-side on this really tight track. You come off these corners and that wall’s just peaking out at you wanting to grab you so. There for awhile we were running three wide off the corner. It’s a lot a fun racing with Daryn and Zobrist and Culp so I can’t wait to watch the video.”

Culp worked his way into second on lap 31, but couldn’t close the gap on the leader.

“I knew we had a good car there. We were just biding our time waiting on the track to widen out a little it,” said Culp. “It was a real good race. Them guys were three wide right in front of me for, I don’t know, 20 or 30 laps it seemed like. Then me and Bobby kinda snuck by ‘em.”

Culp’s last shot came on lap 43 when the race’s only caution flag waved. A spin in turn two that collected both Tim Manville and Billy Laycock slowed the action and gave Culp an opportunity to steal a win. But the clear track worked in Pierce’s favor instead and the series points leader rode away to his 22nd career Summernationals victory.

“I think me and Bobby had pretty equal cars. He wasn’t really leaving me and I wasn’t really gaining on him," Culp said. "Congrats to them guys. They work hard at this deal. I just glad we could finally get a good run in the Summernationals. It’s seemed like I’ve had a monkey on my back at this thing the last couple of years. Second’s not what we want, but it’s a step in the right direction for us.”

Notes: The win was Pierce’s first Hell Tour victory at Highland. … Pierce’s 22nd career Summernationals win moved him into a tie with three-time series champion Dennis Erb Jr., for sixth on the all-time win list. He’s one win away from tying Rick Aukland of Fargo, N.D., for fifth. … The race winner’s only scare came when he caught the slower car of Eric Cooley of Fulton, Miss. The two made contact as Cooley went into the infield, but Pierce motored on. … With one race remaining in Midwest Week, the Hell Tour’s weekly points race, Pierce moved into the lead with Shannon Babb of Moweaqua, Ill., not far behind. Midwest Week, with a $5,000 points fund sponsored by Petroff Towing, ends with Sunday’s race at Kickapoo Speedway in Danville, Ill. Brandon Sheppard led the weekly points entering Highland but was not in attendance. … Ryan Unzicker of El Paso, Ill., who has already missed two series races, was not at Highland. … Culp said before Saturday’s feature that he didn’t plan to go to Kickapoo, instead opting to head back to Arkansas. … Zobrist, Highland’s defending track champion, currently leads the track’s points race.

Bob Gardner of Washington, Ill., rolled by polesitter Jason Feger on the second lap and pulled away to a comfortable win in the consolation race. Matt Bailey dropped Feger to third on lap five, but Feger rallied back after a caution for on lap eight for Dustin Nobbe slowed the action. Feger caught Bailey and made an outside pass for the final transfer spot as they raced off turn four on the final circuit. Jason Zobrist, Paul Stubber, Rusty Griffaw and Dustin Nobbe will use provisionals to start the A-main.

Daryn Klein of Fairview Heights, Ill., about 30 minutes from Highland, registered another victory for local drivers as he outran Billy Laycock of Marine, Ill., to win the final heat. Third-starting Billy Moyer Jr. ran second for half the race, but gave way to Laycock with two laps remaining. Klein won ahead of Laycock, Moyer Jr. and Devin Gilpin. Rusty Griffaw brought out the lone caution when he slowed on lap five.

Hometown drivers Rick Salter and Chad Zobrist, both of Highland, put on a side-by-side battle for the lead in the first four laps before Zobrist finally used the outside lane to edge ahead. Salter, working his way around the bottom, fell into second with Shannon Babb grabbing third ahead of Brent Larson. Taking advantage of a caution on lap five, Babb went to the outside to take the second spot from Salter. Zobrist won ahead of Babb and Salter, with Larson trailing in fourth. Matt Bailey, who spun in turn one to draw a caution on the opening lap, bounced back to finish fifth. The race was also slowed by a caution in the initial start.

Blasting into the lead at the start, Tim Manville of Tryo, Ill., picked up an easy heat race victory as he crossed the stripe 2.767 seconds in front of Gordy Gundaker. Fifth-starting Eric Cooley muscled his way to third early, but eventually settled in behind Michael Kloos as those two took the final transfer spots. Bob Gardner settled for fifth.

Fast qualifier Bobby Pierce jumped to an early lead, taking Timothy Culp along with him as they moved ahead of Billy Moyer. Rodney Melvin moved to the fourth and final transfer spot and they ran that way to the finish, leaving Jason Feger in fifth.

Another sweltering Illinois afternoon has given way to a comfortable evening. Temperatures that peaked in in the low 90s in mid-afternoon dipped to the mid-80s just before heats. … After Late Model qualifying and modified heats, track officials decided to take a break to rework the race track, which had become decidedly one-grooved. Grader work and a bit of water sent drivers, who haven’t been on the track in more than an hour, scrambling to decide which direction they wanted to go with their set-up. Some were making sizable changes, while others just made tweaks. … Late Model heats should be called to staging around 8:45 p.m. … A standing-room only crowd is on hand at Highland for tonight’s UMP DIRTcar Summernationals.

Bobby Pierce of Oakwood, Ill., was the only driver of the 32 on hand who managed to stop the clock under the 15-second mark. Pierce went a 14.905 to set the overall quick time, more than two seconds off of Shannon Babb’s track record of 12.595 seconds. Gordy Gundaker of St. Charles, Mo., was the second quick qualifier in the first group at 15.016. In the second session, Rick Salter of Highland and Daryn Klein of Fairview Heights, Ill., were the two quickest as the track progressively slowed down. Those four earned starting spots on the pole of their respective heat races.

Highland Speedway hosts Saturday's 20th round of the UMP DIRTcar Summernationals with a $10,000-to-win purse on the line at the 1/4-mile oval. Along with Super Late Model hot laps and qualifying, there will be four heat races, a consolation race and a 50-lap main event.

Trekking back toward St. Louis, Mo., the Hell Tour moves to another bullring as the tiny fairgrounds oval in Highland welcomes the series. Afternoon swimmers at the adjacent city swimming pool will give way to Super Late Models and more than two-dozen modifieds by night’s end.

Points leader Bobby Pierce of Oakwood, Ill., gave up a little ground to Shannon Babb of Moweuqua, Ill., on Friday night, but still enjoys an 87-point advantage.  Pierce unofficially inherits the lead in the weekly points battle entering Highland also as Brandon Sheppard of New Berlin, Ill., has jumped off the tour. Petroff Towing is sponsoring Midwest Week and its $5,000 points fund. Midwest Week wraps up Sunday at Kickapoo Speedway in Danville, Ill. Pierce has a 10-point advantage over Babb for the weekly points $2,000 top prize.

Defending race champion Billy Moyer of Batesville, Ark., rejoined the tour Friday at Farmer City and is in the pits at Highland.