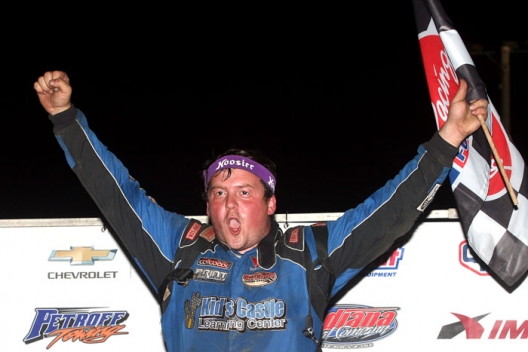 “Luckily, Plymouth was the only track I hadn’t been to and the last three have been really good tracks of mine,” Sheppard said. “The past couple of nights have been close to home and it’s just cool to finally get the family to see me race and see me win at that."

Starting on the pole of Monday’s main event, Babb led the first few laps, falling to third-starting Bronson on the fourth circuit. Bronson maintained his lead through the early running, with Sheppard moving in to the second-place spot on lap seven.

As the front of the field approaching lapped traffic on lap 13, Sheppard began closing in on the race leader, edging ahead of Bronson at the line to take the lead two laps later. But the race was far from over.

With a yellow flag waving just as Sheppard moved to the front of the field, Babb used the restart to his advantage, powering under Bronson down the backstretch to run in second.

Sheppard continued to hold his lead at the halfway mark, but Babb, Bronson and Bobby Pierce of Oakwood, Ill., were not far behind. Babb challenged Sheppard for the lead, nearly pulling ahead on a lap-25 restart.

The pair of Illinois drivers battled side-by-side as the race neared the checkers, with Babb pulling ahead down the backstretch on lap 29, only to have Sheppard edge back ahead out of turn four to lead lap 30. Sheppard pulled away in the final circuits to earn a $5,000 payday.

“I didn’t see any gap,” Sheppard said. “My crew guy never gave me a gap the whole race, so I was elbows up the whole time. The top was the only place where I could make consistent laps, so I was just kind of running as hard as I could, trying to get away, but I couldn’t ever get away. But to have the carburator mess up and still have a good enough car to get the job done … I can’t say enough about Rocket Chassis.”

Babb settled for a runner-up finish, with Pierce running third. Gordy Gundaker of St. Charles, Mo., advanced from the ninth starting spot to finish fourth, with Bronson slipping back to round out the top five.

“It was really good racing with (Sheppard) tonight,” Babb said. “I think everybody’s cars were pretty good. The track pretty treacherous, had a lot of holes, a lot of obstacles out there. A guy didn’t know where to run. In that first turn Bronson got by us. I went down there and tried to avoid the holes and he hit the holes just right and drove by us. I thought I was racing (Sheppard) and realized it was Bronson. We had our hands full out there tonight. Just happy to have a good finish."

Notes: Sheppard notched his 15th career Summernationals victory. … The race was slowed by four cautions. … The first yellow flag waved on lap four when Brian Shirley slow on the frontstretch. … A heavily damaged Tyler Erb slowed to draw a caution on lap 15. … A yellow flag flew on lap 21 when Rusty Schlenk slowed with a flat tire. … Brent Larson got sideways on the backstretch to draw a caution on lap 25. …  Third-place finisher Bobby Pierce was the winner of last year's Hell Tour stop at Quincy.

A yellow flag waved on the opening lap for a tangle in turns one and two involving Billy Hough and Derek Fetter; Brent Larson spun in turns one and two to draw a caution on the ensuing restart. Third-starting Austin Theiss led the first lap as the race went green, with Rick Standridge spinning in turn three for another caution. A yellow flag flew on lap three when Cole Spacek came to a stop on the frontstrech. Polesitter Justin Reed pulled ahead to lead the final laps and win the consolation. Thesis held off a charging Paul Stubber to transfer to the main event.

Polesitter Tyler Erb powered ahead of fellow front-row starter Rodney Sanders on the opening lap, stretching his lead to nearly a full straightaway at the halfway mark. A yellow flag flew on lap five when Brent McKinnon and Jamie Wilson tangled in turn four. Erb held his lead on the restart, as Ryan Unzicker slipped ahead of Rodney Sanders to run in second on lap seven. Erb won the heat, with Unzicker edging ahead of Sanders to finish second. Dustin Griffin grabbed the fourth and final transfer spot.

Working the top side, outside polesitter Shannon Babb pulled ahead of Bobby Pierce to lead the opening lap. A yellow flag waved on lap three when Dustin Nobbe spun in turns three and four. Jason Perry and Derek Fetter tangled in turns one and two to draw a caution on the restart. Babb and Pierce raced side-by-side on the restart, with the edge going to Babb. Fighting off Pierce, Babb won the third heat, with Pierce, Rickey Frankel and Rob Toland transferring to the feature.

Charging to the front of the field at the drop of the green flag, polesitter Brandon Sheppard took an early lead, with second-starting Brian Shirley in tow. Shirley challenged Sheppard in the opening laps, nearly spinning in turn two on the third lap. As the top two distanced themselves from the field at the haflway point, Mark Burgtorf challenged Rusty Schlenk for third. Sheppard edged ahead of Shirley to win the second heat, with Schlenk and Burgtorf grabbing the final two transfer spots.

Polesitter Kyle Bronson took an early lead, with Bob Gardner and Gordy Gundaker shooting ahead of second-starting Billy Moyer Jr. on the opening lap when he slipped in turn four. Bronson maintained his lead at the halfway mark, as fourth-running Moyer Jr. attempted to reel in Gundaker. Bronson won the heat, with Gardner, Gundaker and Moyer Jr. all transferring to the main event.

The Summernationals tour makes its eighth-ever visit to Quincy. ... With 34 cars, the car count is up 15 entries from last year's series event at Quincy. … In its seven previous events at the Illinois oval, the Hell Tour has had five different winners. Shannon Babb of Moweaqua, Ill., is the lone driver with repeat victories. … Among early retirees on Sunday at Lincoln (Ill.) Speedway, Billy Moyer of Batesville, Ark., is not on hand at Quincy. … Rodney Sanders of Happy, Texas, joins UMP competitors at Quincy after scoring a fifth- and sixth-place finish in the Lucas Oil MLRA’s weekend doubleheader at Salina (Okla.) Highbanks Speedway. … Brandon Sheppard of New Berlin, Ill., enters Monday’s event with three straight Summernationals victories. Babb was the last driver to accomplish the feat when he scored seven straight Hell Tour victories in 2011. … Denny Woodworth of Mendon, Ill., currently tops the Quincy weekly points standings. Hometown driver Ricky Frankel was the winner of the raceway's most recent weekly show on June 25; he is second in the track’s points standings.

The UMP DIRTcar Summernationals tour moves to Quincy Raceway on Monday for the 16th Hell Tour event of 2017. The 40-lap feature pays $5,00-to-win.

Defending Summernationals champion Bobby Pierce of Oakwood, Ill., was the winner of last year’s Summernationals event at Quincy. Shannon Babb of Moweaqua, Ill., is a three-time Hell Tour winner at Quincy, picking up victories in 2013, 2009 and 2007.

Monday’s program will include time trials, heat races, consolations (if needed) and the main event. UMP modifieds and sport mods will also be in action.