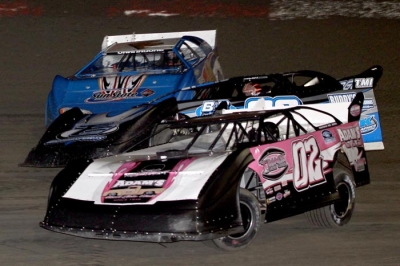 The veteran East Bay driver, who joked in victory lane that practicing at a slick go-kart track earlier in the day gave him an edge, took the lead from polesitter Josh Peacock of Dover, Fla., inside turn three on the second lap and was never headed.

Nosbisch took the checkers ahead of Doug Horton of Bruceton Mills, W.Va., while Dalton Myers of Riverview, Fla., was third. Peacock and Shan Smith of Dade City, Fla., rounded out the top five in the 50-lapper.

Nosbisch survived a stretch of 11 caution flags over the first 24 laps, but had mostly clear sailing the second half of the race. Although Nosbisch seemed to slow a bit late, Horton wasn’t able to make a serious challenge in finishing 1.41 seconds back.

Notes: Nosbisch’s Rocket Chassis is sponsored by Image Skin Care and Adams Automotive. … Only four drivers finished on the lead lap. … Richie Stephens of Salem, Ala., earned $1,500 for winning the World Street Stock Championship. … The Winternationals continue with the Lucas Oil Late Model Dirt Series. Practice is scheduled for Sunday with points races scheduled for Feb. 10-15, including a live telecast at 9:30 p.m. Thursday on MavTV.