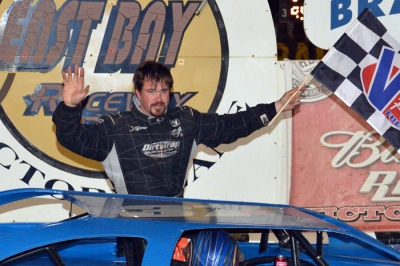 Starting seventh, Davenport took the lead from Devin Dixon of Apollo Beach, Fla., on the 26th lap and never looked back to take a 1.780 second advantage over Franklin at the checkered flag. While Davenport looked dominate on the racetrack, it didn’t feel or sound that way to the race winner.

“The car was stumbling the whole race, except for the last two laps when it went away and ran fine,” said Davenport, fast qualifier among 53 entrants. “Barry Wright gave us a good set up for tonight and that was the big advantage we had. There was some tough competition out here tonight, and it feels good to win against a very competitive field. I want to thank Steve Cooke and the AES Racing crew for giving me a fast car tonight.”

Breuer earned the championship by taking the green flag for the 100-lap feature. Breuer had to take a provisional to make the race, as did his closest challenger for the title, two-time NeSmith Chevrolet Dirt Late Model Series Champion David Gentry of Murfreesboro, Tenn.

Breuer finished 14th and Gentry finished 19th in the main event. Breuer ended up with 1,510 points, with Gentry trailing by 64 points at 1,446 points.

“This AES Racing crew worked hard all season long to keep us in the championship hunt because David Earl Gentry is a tough competitor,” Breuer said. “We had some bad luck and David moved up to tie us with four races left in the season. But then David had some bad luck in the last three races, and that enabled us to pull ahead. David is a great driver to race with, and it was an enjoyable season.”

Dixon finished third in the Mathis Farms Special after leading the first 25 laps. Polesitter Mark Whitener of Middleburg, Fla., was fourth in the Dave’s Towing Special. Brandon Overton of Appling, Ga., took the fifth spot in the Budweiser Rocket and Steve Francis of Ashland, Ky., was sixth in the CVR Race Cars Special.

Phillip Cobb of Apollo Beach, Fla., finished eighth in the Suldea Motorsports Special, and Rodney Wing of Meridian, Miss., was ninth in the Buddy’s Home Furnishings Rocket. The 2008 NeSmith Chevrolet DLMS Champion Chip Brindle of Chatsworth, Ga., rounded out the top 10 in the Bryson Motorsports Rocket.

Even though he missed the show, Chase Edge of Lafayette, AL was honored as the 2011 VP Racing Fuels Rookie of the Year and will pick up a $5,000 check at the NeSmith Chevrolet DLMS banquet next month.

Dixon grabbed the lead at the start of the race from his outside front row starting spot followed by Whitener, Franklin, Wing, and Royce Bray of Hull, Ga. The first of 10 caution flags came out on lap three when Jeff Smith of Chatsworth, Ga., and Steve Banal of Troutman, N.C.

Dixon began lapping cars on lap 12, while Davenport closed in on his teammate Franklin to challenge for the second spot. On lap 18, Davenport stepped to the outside and passed Franklin for second coming off the fourth turn. Whitener regrouped and was making up earlier ground he had lost. On lap 22, Whitener got inside Franklin to take the third spot coming off the fourth turn.

Davenport caught Dixon in heavy lapped traffic on lap 25. Dixon had to go to the high side in turn four on lap 26, and that opened the door for Davenport to scoot underneath and take the lead. Once he was on the point, Davenport began to pull away from Dixon.

The second caution flag of the race came out on lap 41 when last year's race winner Doug Horton of Bruceton Mills, W.Va., stalled on the front straightaway in a cloud of smoke. That erased the half straightaway lead Davenport had opened up on Dixon.

The double-file restart saw Davenport leading with Dixon, Whitener, Franklin, Wing, Bray, Overton, Weaver, Francis and Ivedent Lloyd of Ocala, Fla., doubled up behind him. When the field went green, Davenport and Dixon began to pull away from Whitener.

On lap 42, Doug Watson of Plant City, Fla., flipped in turn one to bring out the red flag. Watson was uninjured in the hard crash, but his misfortune earned him the Dominator Race Products Hard Luck Award.

On the restart, Overton made a big move by passing Bray and Wing to move up to the fifth spot. One lap later, Bray came to a stop in turn two with a cut tire. In the next restart, Gentry spun in turn three to bring out the fifth caution flag of the race. Davenport led Dixon, Whitener, Franklin, Overton, Wing, Francis, Lloyd, Weaver and Shan Smith of Dade City, Fla., down to the green flag.

Weaver had moved up to the seventh spot on lap 45, and on lap 46, Franklin got by Whitener to take the third position. Davenport had pulled out to a half straightaway lead over Dixon at the halfway point in the race, and the leader began to work lapped traffic on lap 54.

While in heavy lapped traffic on lap 60, Dixon had to check up and Franklin shot inside Dixon on the backstretch to grab the second spot. Brindle cut down a tire on lap 62 to bring out the sixth caution flag. The top ten for the restart was Davenport, Franklin, Dixon, Whitener, Overton, Francis, Weaver, Wing, Cobb and Lloyd.

The seventh caution flag came out on the restart when Jeff Mathews of Tampa, Fla., and Shan Smith tangled in turn two. The restart saw the only challenge Davenport had all night, as Franklin pulled to the inside of his teammate, and they raced side-by-side for the lead until Davenport pulled ahead on lap 63.

Overton passed Whitener for the fourth spot on lap 63 coming off the second turn. Caution flag number eight came out for debris on lap 69. Business picked up on the restart as Dixon got by Franklin for the second spot Whitener passed Overton for fourth, Francis passed Weaver for sixth, and Brindle moved up to 10th.

The ninth caution flag came out on lap 75 when Shan Smith spun in turn four. The restart saw more position shuffling among the top ten drivers as Franklin got by Dixon for second, and Brindle moved around Wing to take over the ninth spot.ï¿½ Wing drove to the inside of Brindle to reclaim the ninth spot on lap 80.

With 15 laps to go, Davenport had pulled out to a half straightaway lead over Franklin, but that advantage would be erased on lap 93 when Lloyd stalled in turn one to bring out the caution flag.ï¿½ Davenport led Franklin, Dixon, Whitener, Overton, Francis, Weaver, Cobb, Wing and Brindle down for the restart and the eight-lap dash to the finish.

That’s the order they stayed in to the checkered flag, as Davenport pulled away to take the win with almost a two-second advantage over Franklin. The checkered flag brought a close to the 2011 NeSmith Chevrolet Dirt Late Model Series season, but the 2012 season will begin right back at East Bay on Feb. 2-4.