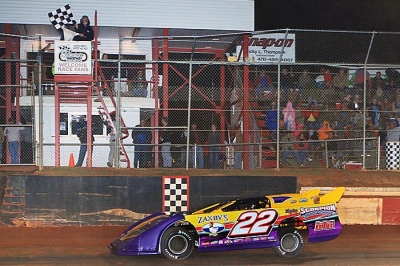 SWAINSBORO, Ga. (Nov. 26) – William Thomas of Phenix City, Ala., drove to the biggest victory of his career Saturday night in the 11th annual Turkey 100 at Swainsboro Raceway, earning $20,000 in the 50-lap, unsanctioned race for Crate Late Models.

Thomas repelled a series of early threats from Appleton, Ga., driver Brandon Overton, who started third, but was able to keep his Scorpion Race Cars-chassied entry out front the entire distance at the 3/8-mile oval to claim the honors over 15th-place starter Mike Marlar, of Winfield, Tenn., Overton, Chip Brindle of Chatsworth, Ga., and Brian Connor of Martinez, Ga. | Slideshow

Marlar steadily worked through the field from the eighth row, grabbing second place from Overton shortly after a restart with 10 laps remaining. He closed on Thomas, twice ducking underneath the race leader with less than five laps remaining. He delivered a nudge on the backstretch, but was unable to find a way past during a tight duel for the checkered flag.

"It was good, hard and clean racing," Thomas said. "It's definitely the biggest race I've ever won, and he made me work for it. He was a lot quicker than we were at the end, so I tried to protect the bottom and make him go where I hoped he wasn't as fast."

Eight cautions slowed the pace. The worst accident occurred on the opening circuit when a multicar scramble on the backstretch sent Mike Pegher's machine for an upside-down ride. He scrambled from his machine without injury. Several cars were involved, including the race's defending champion Jonathan Davenport of Blairsville, Ga., who slid into the mess after starting from the outside of the eighth row.