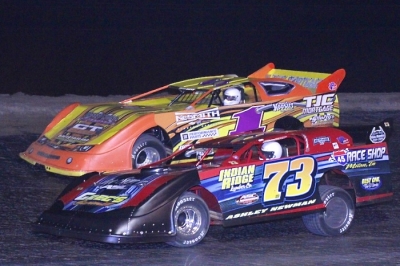 Breuer was able to close in on Newman on the last lap to challenge for the lead and dove to the inside to race Newman wheel-to-wheel through turns three and four. Newman got the better bite coming off turn four towards the checkered flag and took a .646 second victory.

“I found a streak of rubber in the middle groove where I could get a good bite and that’s where I committed to run,” Newman said. “I saw Breuer inside of me on the last lap, and I’m glad he stayed down there and didn’t slide up into me. It was pretty tight working through the lapped traffic, but I wasn’t going to move out of my groove.”

Breuer settled for second, but his finish gave him the series lead by six points over two-time champ David Gentry of Lewisburg, Tenn., who rallied after a lap-35 spin to finish fifth. Neil Baggett of Shannon, Miss., finished third and 19th-starting Michael Blount of Sumrall, Miss., was fourth, earning the Hedman Husler of the Race award.

Finishing behind Gentry in the sixth spot was fast qualifier Johnny Stokes of Columbus, Miss., who led the first 24 laps at the quarter-mile high-banked gumbo clay oval.

Stokes took the lead at the start of the race followed by Duke Palasini and Newman. Breuer was fourth after three laps while Gentry, tied with Breuer for the points lead entering the race, charged from 13th to ninth by lap four.

Newman went to the inside of Palasini on lap eight to take over the second spot coming off the second turn. Gentry moved up to the eighth spot on lap nine, and the leaders began to catch the cars on the tail of the lead lap by lap 10.

That enabled Newman to close in on Stokes and the lead duo raced side-by-side for the lead with Stokes on the outside and Newman on the inside. The first of seven caution flags came out on lap 17 when Jake Knight sailed off the banking of turn three.

Stokes and Newman picked up their battle for the lead, while Gentry got by Bubba Harrison for the sixth spot with an inside move coming off the fourth turn on lap 20. Newman got a run on Stokes coming off the second turn on lap 25, and took the lead going down the backstretch.

With Stokes on the outside, Palasini in the middle and Gentry on the inside, the three cars made contact, and Gentry spun across the track and sailed backwards off the third-turn banking. Gentry was able to restart from the 17th spot as the last car on the lead lap.

When the field went back to green, Travis Mosley spun in turn four to relight the caution bulb. The next restart saw Palasini challenge Stokes for the third spot. The drivers made contact in turn two and Stokes spun, collecting Mark Tice and Shannon Lee.

Both Tice and Lee were done for the night, and Stokes was ticketed with the caution flag. It was the end of the tough weekend for Tice. On Friday night, Tice missed qualifying after his son fell in the pit area and broke his arm sending him to the hospital.

After two more yellows, Newman led Breuer, Palasini, Blount, Baggett and Harrison back to green. Blount got by Palasini for the third spot on the restart, but Baggett made a move up to the third spot on lap 39. Palasini pulled alongside Blount to battle for the fourth spot on lap 40 when the two cars made contact on the front straightaway. That brought out the seventh and final caution flag that was charged to Palasini.

The lineup for the 11-lap dash to the finish saw Newman leading Breuer followed by Baggett, Blount and Gentry. Stokes passed Harrison for fifth on lap 43, and with three laps to go, Newman began to run up on lapped traffic.

Breuer began to close on Newman, and when the leaders took the white flag, Breuer was right on Newman’s back bumper. Breuer ran down Newman going down the backstretch, and he dove to the inside in turn three.

Breuer got alongside Newman in turn four and the top two cars looked at the checkered flag waving in front of them coming off the final corner. Newman got the better bite in his middle groove and beat Breuer back to the finish line.

The next two events for the NeSmith Chevrolet Dirt Late Model Series Tour will be Nov. 19 with the $5,000-to-win Coca-Cola Zero 75 at Whynot Motorsports Park in Meridian, MS and a $2,000-to-win 40-lap event on Nov. 20 at Magnolia Motor Speedway in Columbus, Miss.