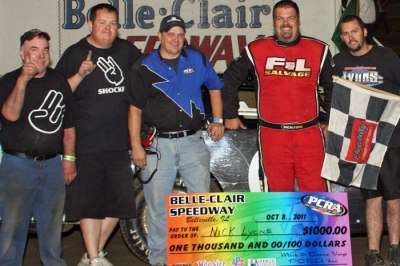 BELLEVILLE, Ill. (Oct. 8) — Nick Lyons of Centralia, Ill., pocketed $3,000 on Saturday at Belle-Clair Speedway for two victories in the King Edwards Flip Flop 50, a sweep that moved him into the points lead on the Pro Crate Racers of America tour.

Lyons earned $1,000 for capturing the night's opening 25-lap feature, and after a 10-car inversion for the following 50-lapper, Lyons earned another $1,000 victory. He pocketed a $1,000 bonus for the sweep in the season-ending event at the fifth-mile oval.

In the opening feature, Clay Baumann and Mike Hammerle started on the front row and battled early with Bobby Dauderman. Lyons was in the mix soon enough and took the lead on the 17th lap, just before a caution for Aaron Heck, who got into the wall. Lyons led the rest of the way, taking the checkers ahead of Dauderman, Hammerlee, Michael Kloos and Tom Carson.

The second feature was set by inverting the top 10 finishers of the first feature, then adding 10 more drivers from a pair of consolation races.

Lyons started in the fifth row and chased the leaders through the early stages before a lap-17 caution when Carson got into the wall and flipped his car.

Dauderman was out front at the halfway point when a wreck put a hole in his car's radiator, knocking him out of the race and leaving Mark Oller and Lyons to duke it out.

Oller and Lyons made contact, leaver Oller's car with front-end damage. During a caution for Evan Fink, Oller retaliated against Lyons and was black-flagged.

Lyons took the lead for good on the 30th lap and took the checkered flag over Daniel Heck, Bobby Martintoni, Clay Baumann and Michael Kloos.