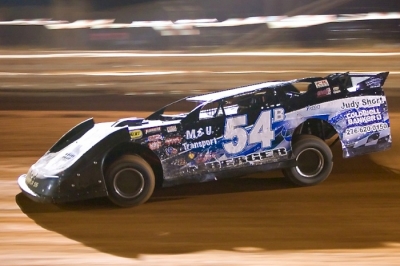 LAWNDALE, N.C. (Oct. 8) — Brandon Umberger of Rural Retreat, Va., won a regional first round event of the Fastrak Grand Nationals on Saturday at Cleveland County Speedway, earning $1,500 and heading to the Oct. 21-22 second and third rounds at Volunteer Speedway at Bulls Gap, Tenn., in the running for the lucrative crown. | Slideshow

"This win is big. It gets us started off in the best way possible to go and try to get the $30,000 at Bulls Gap," said Umberger, who took the lead from Lee Cooper on a lap-38 restart and held off a late challenge from fellow Rural Retreat racer Kenny Peeples Jr. "I tried to save my tires through the middle part of the race and it paid off in the end. I saw Cooper blow that tire and I got a little worried but we had enough left to go another 20 laps."

Track champion Steve Hendren of Rutherfordton, N.C., dominated the first half of the race, but he dropped out on the 26th lap, handing the lead to Cooper. Cooper led 12 laps but shortly after losing the top spot to Umberger, he shredded a right-rear tire that broke his car's driveshaft.

Notes: Umberger's Barry Wright Race Car is sponsored by M&U Transport and Judy Short of Coldwell Banker. ... Dale Ball started on the front row but spun after contact with Umberger on the initial start, knocking Ball out of the race; Steve Hendren inherited his front-row spot. ... Chris Steele was running seventh when engine problems forced him out on lap 37. ... The main event, slowed by six yellow flags and a three-minute red flag, lasted 48 minutes. ... Chad Hale provided the crowd with a scary moment in the second heat race when he launched his machine over the turn-three wall; he was uninjured in the incident but his Crate Late Model was destroyed. ... Among drivers failing to make the feature lineup: Anthony Sanders, Doug Sanders, Adam Yarbrough, Jonathan Duvall, Vic Chandler, Brian Ligon, Jerry Broyles, Tate Hughes and Owen Osteen. ... Drivers move to the second and third rounds of the Grand Nationals on Oct. 21-22 at Volunteer Speedway, where the overall Grand Nationals champion will pocket $30,000.