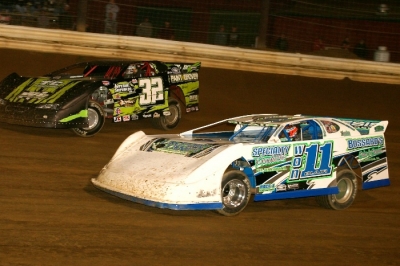 Making just his fourth series start of 2011, Blair overtook Derek Rogers on the 12th lap and held off Ryan Montgomery in becoming the 11th series winner of the season.

"This class is so competitive," said Blair, a veteran of Super Late Model racing. "It's just so equal and built for everyone. (Montgomery) was really good and if I would have screwed up he probably would have passed me."

Kyle Thomas was third followed by Dan Angelicchio and Josh Holtgraver. Max Blair, the winner's son, dropped out of the race for his third straight finish outside of the top 16, but he clinched his third series title in four seasons.