Gentry outduels Shaw for $2,500 at Greenville 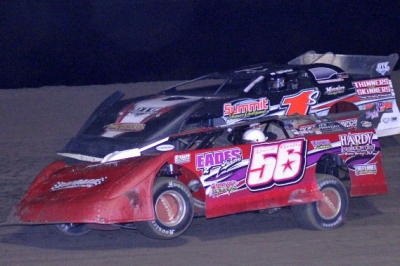 GREENVILLE, Miss. (Oct. 8) — Two-time NeSmith Chevrolet Dirt Late Model Series Champion David Gentry of Lewisburg, Tenn., edged away from a tight battle with Jeremy Shaw of Millport, Ala., on Saturday at Greenville Speedway for his first series victory of the season. | Slideshow

The $2,500 victory moved Gentry into a tie for the lead in series points with Dan Breuer of Troutman, N.C., who started 13th and finished fifth. Gentry and Breuer each have 1,160 points at the top of the NeSmith Chevrolet DLMS points list.

Gentry and Shaw swapped the lead three times during laps 22 through 24 with Gentry taking the lead on lap 24 and then pulling away in the second half of the race to win by a full straightaway.

“This car is a new Warrior chassis and after I called Sanford Goddard at Goddard Performance today, he gave me a set up to try, and it worked great,” Gentry said. “We had a good race there at the halfway point with Shaw. It was close, but fun racing. I can’t wait to get back here to Greenville Speedway next month to battle Dan Breuer for the championship.”

The next race for the NeSmith Chevrolet Dirt Late Model Series will be back at Greenville on Nov. 3-5 for the $3,000-to-win Gumbo Nationals 50. Gentry and Breuer own wins this season on the quarter-mile gumbo clay oval, as Breuer took the win in the Rumble On The Gumbo 75 on April 9 at Greenville.

The 2011 NeSmith Chevrolet Dirt Late Model Series Champion will receive $20,000 out of the $50,000 points fund at the end of the season in addition to the NeSmith Cup Trophy. Four series races remain.