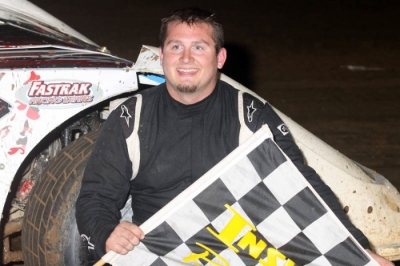 EAST SMETHPORT, Pa. (Sept. 24) – Wayne Robertson of Corning, N.Y., inherited the lead with two laps remaining in Saturday night’s Fastrak Northeast Touring Series event at McKean County Raceway when a skirmish between leaders Max Blair and Mike Pegher Jr. resulted in Pegher going for a spin and Blair being sent to the tail of the field. | Slideshow

Robertson, a newcomer to the tour in 2011, held off a furious charge by Joe Martin of Mayport, Pa., in the final run to the finish and earned $1,700 for the first victory of his career on the Crate Late Model tour.

"This is the toughest class I've ever raced in," Robertson, 29, said after his victory. "The competition is unbelievable. This has been a long time coming. The car was coming on at the end; I just wasn't fast enough, but was in the right place at the right time. I have to thank my crew, family, and beautiful wife."

Martin settled for the runner-up finish for the second time in the tour’s past three races. Chad Valone of Warren, Pa., was third while Kyle Zimmerman posted a career-best finish of fourth. Damian Bidwell advanced from 19th to fifth to score his second-consecutive top-five finish.

Blair, the series points leader, started third and trailed the pole-starting Pegher, his closest challenger in the standings, for the majority of the event. The two drivers made contact on lap 23, and more contact the following lap sent Pegher for a spin. Race officials penalized Blair for his involvement, opening the door for Robertson to score the victory.

Blair of Centerville, Pa., ended up 17th in the final rundown, while Pegher of Wexford, Pa., was 23rd.