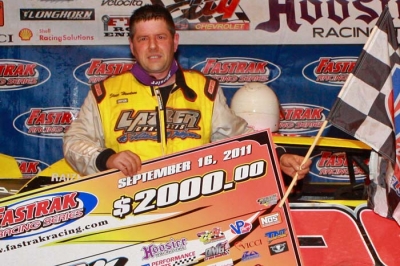 While Hendren was in line for $2,000 in purse money and another $2,000 in bonuses and contingencies, he left without any cash after pledging his earnings to the Hospice of Rutherford County that helped care of his late father. | Slideshow

"My goal is to leave here with a race car and a huge sense of pride," Hendren told the other 45 competitors before the event. Hendren achieved that goal after helping organize the successful event, working the phones three weeks to build cash and prizes for the Fastrak Southeast touring event for Crate Late Models.

Hendren continued his work at the racetrack behind the wheel, capturing the night's Dash for Cash, starting up front in the 40-lapper, and dominating at the 4/10-mile oval by lapping all but seven competitors.

“We had a really good car tonight and it was just meant to be," said an emotional Hendren in victory lane. "I think my dad would have been really proud of this race and all the people that had a part in it. I am very proud to be the winner. I need to thank all these fans for coming out and hanging here with us. And I really want to thank all of the drivers, car owners, sponsors and everyone who helped to make this race such a great success. We are looking forward to making next year even bigger and better.”

The race was slowed by five incidents, the most serious when Furman Parton of Union Mills, S.C., slammed the right side of his brand new car into a tire barrier in turn one. The car was destroyed after briefly going airborne before returning to earth on four tires, but Parton wasn't hurt.