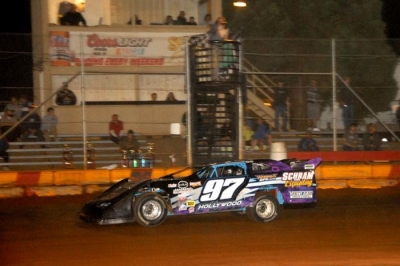 The polesitting Walters took the lead from fellow front-row starter Jason Wines of Lebanon, Ore., on the 16th lap and led the rest of the way in the 67-lap T&G Trucking Doug Walters Memorial for his third win in a row on the series and fourth of the season. | Slideshow

Steve Suckow of Hillsboro, Ore., was second followed by Trevor Glaser of Tangent, Ore., who subbed in the car of suspended driver Jimmy Schram. Joey Tanner of Portland, Ore., and Wines rounded out the top five at the third-mile oval.

Wines jumped into the lead at the outset, stretching away from Walters and Suckow over the first 10 laps. But Walters quickly began reeling in the leader and took command on lap 16, running unchallenged the rest of the way while checking out on long runs.

Suckow got past Wines on a lap-27 restart but never took a serious shot at the lead while Glaser, who started third, dropped back to fifth before moving back toward the front by the finish.

Three cautions slowed the action. Jack Marontate stopped in turn two with a left-front flat tire on the third lap. Britton Donahoo spun in turn four on the 21st lap and Mike Keely spun near the same spot on lap 26.

Notes: Walters is sponsored by Schram Brothers Excavating, T&G Trucking, Rogers Repair and Warpaint Graphics. ... He has won his father's memorial race ever since his passing in 2008. ... Twelve drivers finished on the lead lap with 17 running at the finish. ... Trevor Glaser piloted Jimmy Schram's No. 22s because of Schram's one-race suspension for retaliating against Walters in the previous series event. ... Series regular Steve Moore was able to compete despite suffering with kidney stones. ... Next up on the series is an Aug. 20 event at Grays Harbor Raceway in Elma, Wash.