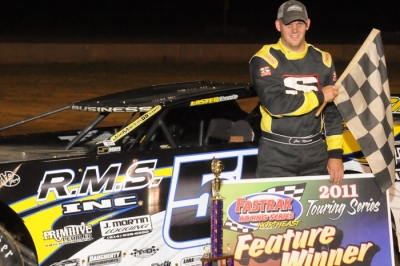 STRONGSTOWN, Pa. (July 26) – Joe Martin used a mid-week event for the Fastrak Northeast touring series for Crate Late Models as an opportunity to turn his bad luck around. The 26-year-old Mayport, Pa., driver, who had struggled on the tour with just two previous top-five finishes on the season, finally broke through for a victory Tuesday night at Dog Hollow Speedway.

Martin led all 25 laps of the feature after starting from the pole and earned $1,500 for his first series victory of the season and sixth of his career.

"We had a good car, but it helps a lot to start up front," Martin said of his victory. "We went with a hard tire and the cautions hurt us. I probably was under driving it until I saw Andrew (Satterlee). He runs the bottom and I run the top. He raced me clean and is fun to race with. I just tried to hit my marks."

The event was the undercard event on a night that also featured a World of Outlaws Late Model Series event won by Darrell Lanigan of Union, Ky.