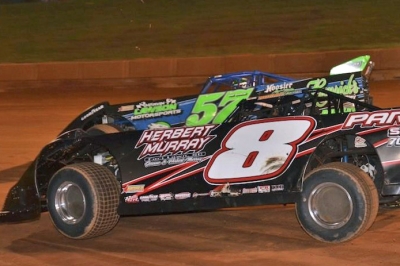 Mitchell faced pressure from fast qualifier Ron Parker of Lawndale, N.C., particularly over the final 10 laps has Parked pulled nearly alongside exiting turn two. But Mitchell held on for the victory, leaving Parker to settle for second.

The most serious caution appeared on the 22nd lap when Chris Cheek and Furman Parton tangled exiting turn four while battling for the eighth spot, blocking the frontstretch. Nearly half the field sustained damage but only Seth Key was done for the night.

Notes: Mitchell's MasterSbilt Race Car is powered by a Clements Racing Engine and sponsored by Hamrick's of Gaffney, Clary Hood Inc., and Marvin Lawson Motorsports. ... Chase McCormick slowed the bring out the first caution. ... Next up for NDRA Road Show competitors is a July 30 event at Lancaster (S.C.) Speedway.