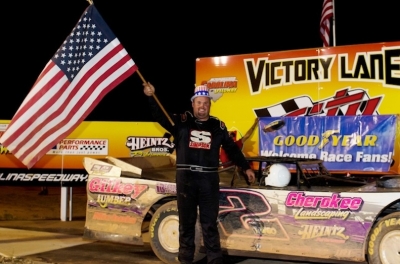 Franklin outran Steve Hendren of Rutherfordton, N.C., and hometown driver Matt Stover for the victory at the 4/10-mile oval while Zack Mitchell and Matt Long rounded out the top five.

With Brown out front, Hendren used the restart to move into third, then took second from Parker and began tracking the leader using the low groove.

Hendren took the lead with a pass exiting turn four, and a caution waved shortly thereafter when Parker got together with Greg Edwards in turn two. Parker, who entered the race leading the series points, limped to the pits with suspension damage.

On the restart, Hendren stayed in control while Anthony Sanders took second from a fading Brown. Franklin was in the top five and was up to third after a caution for Sanders, who slowed with body damage.

Franklin took second from Mitchell on the 28th lap, then went to work on Hendren in the race's late stages. He made the winning move with three laps remaining and Hendren settled for second.