Bouncing back from DQ, Overton wins at Screven 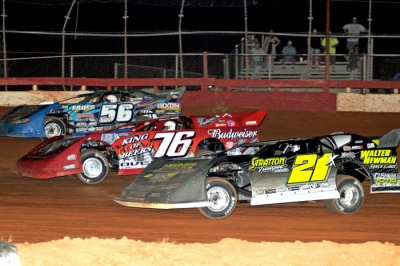 SYLVANIA, Ga. (June 4) — One night after being disqualified for using a chemically-altered tire in an apparent victory at Oglethorpe Speedway Park in Savannah, Ga., Brandon Overton of Appling, Ga., was back in action in a NeSmith Chevrolet Dirt Late Model Series event at Screven Motor Speedway Saturday night and scored a $2,500 victory in the 50-lap race. | Slideshow

Overton started third, took the lead on lap 16 and never looked back to take a 2.682 margin of victory at the checkered flag.

“This is our first late model win, and it feels good to be able to take this trophy home with us after last night,” Overton said. “Our car was a little on the tight side, so just tried to keep it on the bottom of the track. If anyone was going to pass me, they were going to have to do it on the outside.”