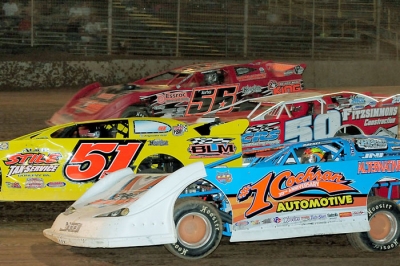 Russ King (56), in a four-wide battle, came out on top Monday at Lernerville. (stivasonphotos.com)

SARVER, Pa. (May 30) — Russ King of Bristolville, Ohio, overtook Max Blair of Centerville, Pa., on the 15th lap Monday at Lernerville Speedway and raced to a victory on the Fastrak Northeast touring series for Crate Late Models.

King, the 2009 World of Outlaws Late Model Series Rookie of the Year, earned $1,500 for a victory in the Bill Emig Memorial, which drew 46 entries.

"I was rolling around good on the outside and I knew I was pretty good when I passed Max," the 22-year-old King said. "I just steered clear of the lapped cars, but I never let my guard down. Robbie (Blair) was good on the bottom and he's the type of guy that will search around and find the right line."

Blair settled for second while his father Robbie Blair of Titusville, Pa., crossed the line third. Mike Pegher Jr. of Wexford, Pa., and Joe Martin of Mayport, Pa., who led the first three laps, rounded out the top five.

The race was on the undercard for the opening event of the USAC Wingless Sprint Eastern Storm through Pennsylvania. Jon Stanbrough earned $6,000 for the feature victory.