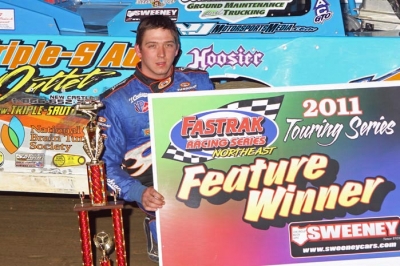 MARKLEYSBURG, Pa. (April 30) – Roaring Knob Motorsports Park isn’t Mike Pegher Jr.’s home track, be he has certainly made himself right at home at the 3/8-mile racetrack over the past year.

Pegher of Wexford, Pa., moved by Rick Strickler of Morgantown, W.Va., on lap 10 of the 25-lap Fastrak Northeast Series feature Saturday night at Roaring Knob and held off a late charge by Dan Angelicchio of Greensburg, Pa., for his third consecutive series victory at Roaring Knob, dating back to last season. He earned $1,200.

"I was following the 48 car (Strickler), but wasn't going to get around him," explained the 25-year-old Pegher, who’s now tied with Max Blair atop the series all-time winlist with nine victories. "I knew I had to try a different line as we were both running the bottom. The outside seemed to work for me earlier so I tried it and it worked. Once I got by I knew I had to get back to the bottom as (Dan) Angelicchio was running good down there.”

Angelicchio settled for the runner-up finish in the event that served as the season opener for the series after the original opener at Tyler County Speedway in Middlebourne, W.Va., was twice postponed by rain.

The race was held along with a $10,000 Lucas Oil Late Model Dirt Series event that was won by Scott Bloomquist of Mooresburg, Tenn.