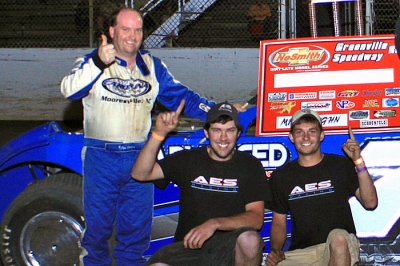 Dan Breuer and his crew celebrate a $5,000 victory at Greenville Speedway. (Best Photography)

GREENVILLE, MS – As an Iowa native who now lives in Troutman, N.C., Dan Breuer found the gumbo clay of Greenville Speedway to be a familiar surface Saturday night and raced to a $5,000 victory in the Rumble on the Gumbo 75 for the NeSmith Chevrolet Dirt Late Model Series. | Slideshow

After restarting from the fifth position on lap 68, Breuer moved to the outside groove and took the lead from Mike Boland of Cuba, Ala., on lap 72 and pulled away to the victory.

“I grew up in Eastern Iowa and began my racing career there, so I’m used to racing on this Mississippi River gumbo clay,” Breuer said. “When we were working lapped traffic, I found out that my car worked good on the high side. I went to the outside after that last restart because there was nothing left on the bottom, and I had nothing to lose.”

Boland led the first 71 laps of the race, but had a tire going down late in the race. He held on to score the runner-up finish.

After starting from the 14th position, Matthew Turner of Dawsonville, Ga., also made a late charge, moving from seventh to third after the lap-68 restart. Johnny Stokes of Columbus, Miss., claimed the fourth position at the finish with two-time NeSmith Chevrolet Dirt Late Model Series Champion David Earl Gentry of Murfreesboro, Tenn., rounding out the top five finishers.

Shannon Lee of Lumberton, Miss., was involved in a lap-23 tangle and cut down a tire on lap 34, but recovered from both setbacks to finish sixth.

The victory extends Breuer’s lead in the series standings to 24 points over Gentry. The next series event is another 75-lap, $5,000-to-win event scheduled for April 22-23 at Delta Bowl Speedway in Tunica, Miss.