Holmes rebounds for $4,000 victory at GVS 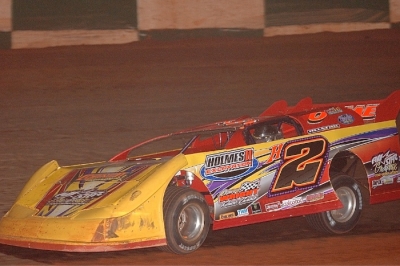 GLENCOE, Ala. (March 25) – After leading the first half of Thursday night’s opening round feature at Green Valley Speedway’s third annual GVS Crate Nationals only to fade to a fifth-place finish, Stacy Holmes of Munford, Ala., rebounded to lead every lap of Friday night’s feature to claim a $4,000 victory at the 3/8-mile racetrack. | Slideshow

The event was originally scheduled to pay just $2,000 to the winner, but because of impending bad weather, track officials cancelled Saturday's $2,000- and $5,000-to-win features and doubled the payout for Friday’s race.

Holmes held a comfortable advantage throughout much of the 60-lap race, while fifth-starting William Thomas of Phenix City, Ala., worked his way forward. Thomas moved by T.J. Alford of Ball Play, Ala., for second during the race’s middle stages, and began to steadily narrow Holmes' advantage in slower traffic.

Thomas cut the gap to just a few car lengths by the time the race’s fourth and final caution appeared on lap 53, but Holmes was able to pull away on the restart and raced to an uncontested win over the race’s final seven laps.

Thomas settled for the runner-up finish while Alford finished in the third position. Kasey Hall of Geraldine, Ala., finished fourth after stating 11th, with Friday night’s feature winner Ronnie Johnson of Chattanooga, Tenn., rounding out the top five finishers.

"It's a lot of fun when everything works,” said Holmes, a veteran Super Late Model driver making just his second Crate Late Model start. “We got beat on tires and traffic last night here, and I just tried to run smooth laps, make no mistakes and not beat myself. I knew I couldn't wait on lapped traffic tonight, and I didn't. They were gonna have to move. When you can come here and outrun Ronnie Johnson at this track, you've done something good because when that guy comes here, he usually leaves with the money."