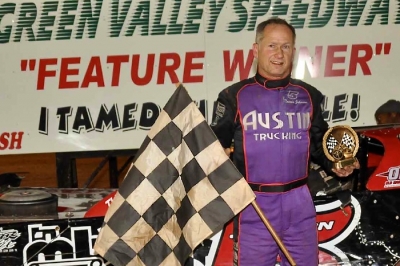 GLENCOE, Ala. (March 24) — Negotiating lapped traffic better than anyone, Ronnie Johnson of Chattanooga, Tenn., made a third-to-first move amid a flurry of hard racing among the frontrunners Thursday night en route to a $2,000 victory on the opening night of the third annual GVS Crate Nationals at Green Valley Speedway. | Slideshow

Stacy Holmes led the field for the first 25 circuits of the 40-lapper, at times holding a comfortable lead after taking the early advantage from the pole. After the lone caution appeared with two laps completed for Chad Jensen's slide over the third turn, the rest of the event was completed under green-flag conditions and the tires on Holmes's car gradually went away.

When his right-rear tire faded noticeably and lapped traffic loomed ahead near the lap-20 mark, Holmes was caught by second-running William Thomas and Johnson.

As Holmes struggled to make it through the backmarkers, a three-way battle for the point developed and Johnson slipped into the lead during the frenzied action shortly after the midway point, leaving Thomas with a runner-up finish over ninth-starting Jason Hiett and Elbert McCullough. Holmes faded to fifth.

"I was too soft on the right rear," Holmes said after making his first appearance in Crate Late Model. "I had to overwork it getting through lapped traffic, sliding the car instead of driving it straight. As long as I could keep a straight line, we were good. When we hit the traffic, I couldn't do that. Once you've lost the right rear, it's over for you."

Johnson worked the traffic perfectly, passing both Thomas and Holmes and then easing his way to a comfortable advantage by the time the checkered flag waved.

"You don't mind traffic when it works in your favor, but sometimes you hate it when the situation goes the other way," Johnson said. "I figured we were gonna be a third-place car tonight the way we were running early in the race. We were too tight from the start and have been fighting that problem all night long, but I overheated the right rear just before we hit that lapped traffic. That somehow freed the car up just enough to get through there. I drove as hard as I could the whole night, and it paid off with a win for us."

The weekend continues with $2,000-to-win events on Friday and Saturday, and then a $5,000-to-win finale on Saturday among the top drivers over the three nights of racing.