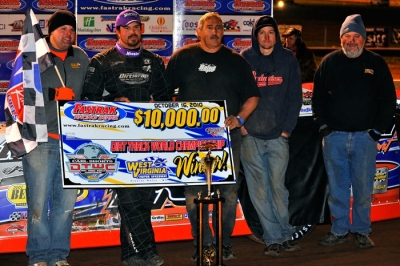 MINERAL WELLS, W.Va. (Oct. 16) — Jonathan Davenport of Blairsville, Ga., dominated the Fastrak Mid-Ohio Valley event for Crate Late Models at West Virginia Motor Speedway, leading all 50 laps at the 5/8-mile oval and lapping all but three competitors for a $10,000 victory.

The 27-year-old Davenport earned his second Fastrak victory of the season at WVMS moments after finishing fourth in the Super Late Model portion of the Dirt Track World Championship.

David Smith of Inman, S.C., was second followed by Dan Angelicchio of Greensburg, Pa., and 12th-starting Dan Breuer of Mooresville, N.C. Shane Hitt of Buckhannon, W.Va., rounded out the top five while Chip Brindle of Chatsworth, Ga., slipped to sixth on the last lap after a 360-degree spin.

The event got off to a rough start when a multicar accident on the backstretch of the opening lap took out five competitors and saw several others pitting and returning to competition at the tail. Away from the accident, outside front-row starter Jimmy Schiltz slammed the wall when his car wouldn't turn, ending his night prematurely.

Davenport moved to the outside front row when racing resumed and quickly drove by the polesitting Angelicchio with Brindle, Smith and Hitt in tow. The race's second and final caution slowed action when Illinois racer Credence Mott got into the wall with six laps completed.

When green replaced yellow, Smith made a nice move to pass both Brindle and Angelicchio for second. Davenport slowly pulled away from the pack, while the race was on for second. Smith had trouble getting around the lapped car of Kyle Lukon, which allowed Angelicchio, Breuer and Brindle to close in, making it a four-car race for the runner-up spot. By lap 30, Hitt caught up to the pack as now five cars raced for the second spot.

With a slight nudge, Smith was able to get past Lukon and opened up some breathing room until lap 41 when Angelicchio was right back on the Smith's tail. Angelicchio tried every move possible getting underneath and at times nearly alongside Smith, but just couldn't make the pass even though it appeared he was faster.

Out front, Davenport was all alone, cruising to a victory and lapping all but three drivers in the 24-car field.