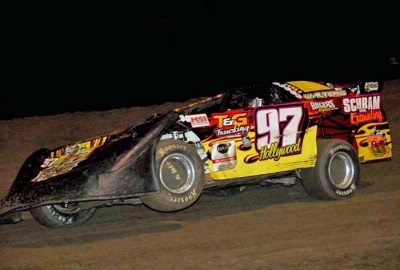 Greg Walters heads for his victory and championship. (Steve Reeck)

Walters, who entered the event two points behind Wines in the title chase, got the jump from outside the front-row and held off repeated challenges from Wines throughout the 40-lap Roger Lorenzini Memorial Battle of the Border feature. | Slideshow

Walters earned $1,000 for the victory and $5,000 for the championship in a season where he won a series-best six features.

Wines finished second in the race (and the title chase) while Steve Moore, Joey Tanner and polesitter Brady Sell rounded out the top five.