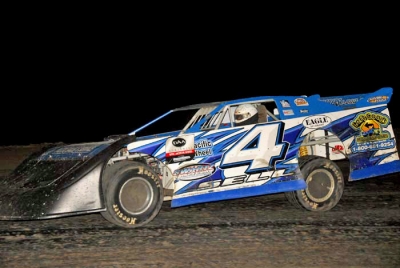 MADRAS, Ore. (Sept. 11) — Polesitter Brady Sell of Salem, Ore., led all 40 laps Saturday at Madras Speedway for his third victory in the last four races on the DAA Northwest Crate Late Model Series. Sell earned $1,000 as he continued his hot streak on the first-year tour. | Slideshow

While Sell led all the way, he had to survive a few tense moments when Tim Goodwin got into his car exiting turn four, causing the leader to spin out on the frontstretch early in the race. But race officials restored Sell to the lead and sent Goodwin to the tail.

The seventh-starting Goodwin, driving Jimmy Schram's No. 22, nevertheless rallied back to finish second while Billy Workman Jr., series points leader Jason Wines and Justin Dittman rounded out the top five. Greg Walters, who entered the event tied with Wines for the series lead, was a no-show but Joey Tanner carried his number and provided him series points.

The most serious of several cautions came on the 16th lap when Britton Donahoo bounced off the frontstretch wall exiting turn four, collecting, Brittany Ray and Jim Peterson. The three cars were wedged together and suffered significant damage, but all eventually continued.