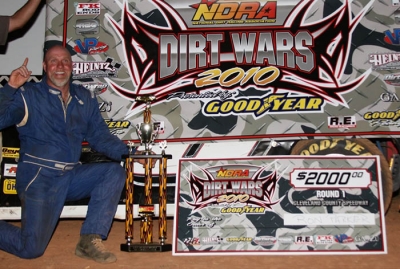 Schlitz was in control by 15 lengths in the 40-lap race's late stages when he was slowed trying to lap Kevin Wilson, allowing Parker to close. Schiltz tried to make an outside move, but when he instead dropped to the low groove he made contact with Parker, shredding Schiltz's left-rear tire.

Parker led the rest of the way for the victory over Timbo Mangum, Jordan Anderson, Dennis Franklin and Ryan Atkins. Schiltz ended up ninth.

Dusty track conditions contributed to several cautions. Among the incidents were a lap-three wreck that knocked Jeff Cooke and Steve Banal out of action, and a late-race accident involving seven cars and launching Chris Cheeks machine airborne; he wasn't injured.

The second round of the three-race NDRA Dirt Wars is scheduled for Sept. 17 at Carolina Speedway in Gastonia, N.C. The third round is Sept. 25 at I-77 Speedway in Chester, S.C.