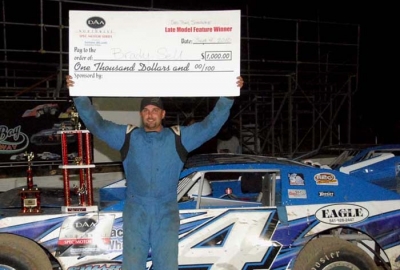 Notes: A lap-nine caution appeared for Mike Kelly's spin and subsequent carburetor fire. ... Greg Walters, who entered the race leading the series points, cut down a left-rear tire midway through the race running sixth. When series officials learned Walters returned to the track without all the lugnuts on the wheel, a safety caution was thrown on lap 15. ... Jeff Biffle, driving a Jerry Schram backup car, scratched from the feature after having engine problems in his heat race. ... Hometown drivers Mike Gage and Daryl Rogers made their first series series appearances. ... Tim Goodwin drove Jimmy Schram's No. 22s.

Tim Goodwin led from the outset with Ferrando, Walters, Gage and Joey Tanner in pursuit. With racing limited to single-file on the slick track, Goodwin stayed in control through most of the race, but three laps remained after a caution for Russ Sell's spin.

On the restart, Goodwin slipped high in turns one and two, making contact with Walters and allowing Ferrando to take command. Ferrando led the rest of the way with Wines getting second and moving into a tie for the series points lead with Waltes, who slipped back to fourth. Tanner finished third and Brett James rounded out the top five.

Notes: Britton Danahoo and Brandon Biffle tangled on the second lap, knocking both cars out of the race. ... Ferrando briefly slipped back to third midway through the race but regained the spot from Walters three laps later. ... Tanner drove a Greg Walters backup car. ... Next up for the series is a Sept. 11 event at Madras (Ore.) Speedway.