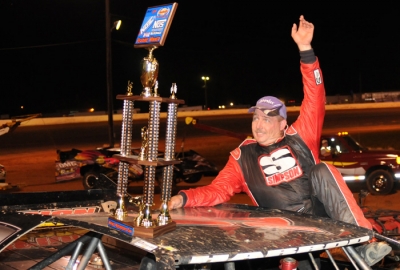 MERIDIAN, Miss. (Sept. 3-4) — Larry Harrod of Plains, Ga., won the NOS Energy Drink 75 for the NeSmith Chevrolet Dirt Late Model Series National Tour on Saturday night at Whynot Motorsports Park driving the Harrod Logging Scorpion. Harrod held off challenges from several drivers in a three-wide battle for the lead in lapped traffic to post his second victory of the season.

In addition to taking the $5,000 top prize to the bank, Harrod also takes over the VP Racing Fuels Rookie of the Year lead and the fourth spot in the NeSmith Chevrolet DLMS National point standings.

Harrod raced for the lead with Mike Boland of Cuba, Ala., hometown driver Larry Murphy and reigning series champ Eric Cooley of Fulton, Miss., in heavy lapped traffic. The only time it seemed anyone could get close to Harrod was in lapped traffic, as Murphy led the 46th lap, but it was Harrod leading all of the rest of them.

“When we were in lapped traffic, I knew everyone was coming and I gave up the lead for a lap before I could find my line to get the lead back,” Harrod said. “The last time we were here in June we learned a lot that we put to use this weekend, and it worked. The first part of the race, my car worked so well I never lifted off the throttle.”

Boland finished second followed by Murphy and the 14th-starting Cooley, who ran as high as second. Charlie Henderson finished fifth.

The most serious of several cautions came on lap 63 when Chip Brindle cut down a tire and spun in turn two collecting several other cars. Brindle’s car was hit several times and it took two wreckers to get it back to the pit area.