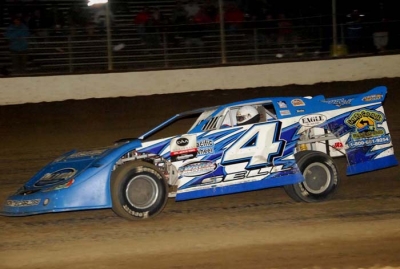 Four cautions slowed the event, none for serious incidents in a race where 14 of 20 starters finished on the lead lap.

Notes: Brady Sell's Swartz Race Car is sponsored by 106.3 KLOO Timeless Rock, South Pacific Auto Sales, Eagle Trailer, Leftcoastmotorsports.com and Driving Force Graphics. ... Terry Ferrando's 14th-to-seventh run gave him hard charger honors. ... Nineteen of 20 starters were running at the finish. ... Doug Trout spun into the turn-four infield to draw the first caution on lap 13, and Russ Sell was hit and spun on the restart. ... Kent Dollarhyde's single-car spin drew a lap-15 yellow. ... The caution flew the final time on lap 31 for debris. ... Because Jimmy Schram didn't arrive at the track until just before the main event, his car was timed in by Jason Wines and driven in the heat race by Steve Moore. Schram started on the tail of the feature and finished 11th. ... Next up for DAA Northwest Series competitors is a Sept. 4-5 event at Coos Bay (Ore.) Speedway.