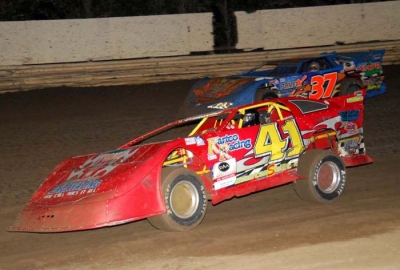 LEBANON, Ore. (Aug. 21) — Hometown driver Jason Wines raced to the front from his fifth starting spot at Willamette Speedway on Saturday and grabbed his third DAA Northwest Crate Late Model Series victory of the season. Wines earned $1,000 in a race cut to 29 laps from a scheduled 40 because of an 11 p.m. curfew. | Slideshow

The most serious of several slowdowns appeared when Russ Sell's car flipped on the frontstretch after a multicar accident. He wasn't injured but the delay for the red flag, and another scramble on the ensuing restart, forced officials to cut the race to 30 laps.

When a lap-29 caution appeared for debris, the checkers came out during the caution to mark the event's conclusion.

Notes: Wines is sponsored by Kartco Racing, Schram Brothers Excavating, Lebanon Auto Body and Prime X Contracting. ... Terry Ferrando of Keizer, Ore., made a 14th-to-fourth run for hard charger honors. ... Billy Workman Jr. also competed in the track's open-competition Late Model action, winning the dash and finishing 14th in the main event, won by Trevor Glaser. ... Steve Moore damaged his car's nosepiece in a first-lap skirmish and ended up returning many laps down after repairs were made. ... Jeremy Shank drove the No. 4 car normally piloted by Brady Sell. ... Justin Dittman drove the No. 13 usually driven by Charlie James. ... Next up for DAA Northwest competitors is an Aug. 28 event at Grays Harbor Raceway in Elma, Wash.