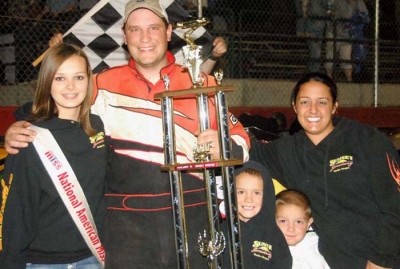 Jason Wines of Lebanon, Ore., finished second after battling with Walters for the lead midway through the race. Russ Sell, Joey Tanner — who led early in the race — and Terry Ferrando rounded out the top five in a race slowed by five cautions. Fast qualifier Jimmy Schram fell from contention when spun in turn three on the 22nd lap after tangling with Ferrando.

Notes: Walters is sponsored by T&G Trucking and Schram Excavating. ... Most of the cautions for were minor single-car incidents. ... Ten cars finished on the lead lap. ... Britton Danahoo had a hard heat-race accident and pulled off after taking the green in the feature. ... Next up for the series is an Aug. 21 event at Willamette Speedway in Lebanon, Ore.