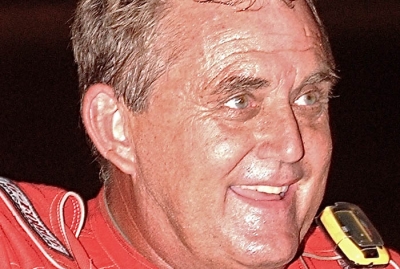 Race fans who braved triple digit temperatures were treated to three and four wide racing that did nothing to chill the race-time temperature of 102 degrees with a heat index of 118 degrees.

Stokes held off the defending series champion and current points leader Eric Cooley of Fulton, Miss., by .196 seconds in a side-by-side finish.

Stokes took the lead on lap 28 after early race leader Justin McRee of Tuscaloosa, Ala., lost a driveshaft. McRee had a big lead before his misfortune, and was the only driver on the track not battling wheel-to-wheel for position.

Matthew Turner of Dawsonville, Ga., ran up front all night long, and led for three laps early before settling for third. Stokes, Cooley and Turner spent most of the race battling for second in a duel that turned out to be for the lead after McRee dropped out.

Cooley made an unsuccessful try on lap 39, but he got a better run going down the backstretch on lap 40. Cooley dove to the inside, and appeared to have Stokes cleared coming off the fourth turn to the checkered flag. Stokes, however, had momentum coming off the high side of turn four and stayed alongside Cooley down the frontstretch.

Cooley had to slow his momentum just enough to keep from running into Stokes on his right, and that’s all Stokes needed to inch ahead at the start-finish line and take the win by less than a half a car-length.

Jamie Tollison of Kosciusko, Miss., took the fourth spot while Jeremy Shaw of Millport, Ala., rounded out the top five. Fast qualifier Chip Brindle of Chatsworth, Ga., was sixth.