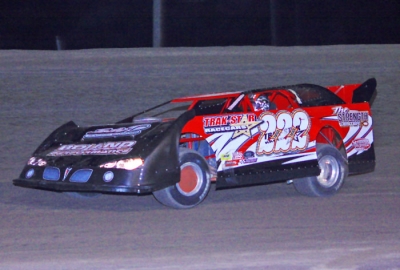 In Friday’s opener, Boland led flag-to-flag for his third series victory of the season and ninth of his career, moving him into second on the all-time list. He used the low groove in beating Chip Brindle of Chatsworth, Ga., to the checkered flag by 1.668 seconds.

“It was our plan to stay on the bottom of the track as much as we could,” said Boland, who builds his own Trak-Star Race Cars. “I don’t know who was behind me, but I knew they were there."

Mike Palasini Jr. of Leland, Miss., was third after falling back to sixth while series points leader Eric Cooley of Fulton, Miss., and Johnny Stokes of Columbus, Miss., rounded out the top five at the 3/10-mile oval.

In Saturday’s race, Hiett mastered Greenville’s gumbo clay and led all 50 laps of the weekend finale.

“The track surface here is a lot different than what we have at home, so it took us a while to figure it out,” Hiett said. “We weren’t that good last night, so we changed just about everything on the car except the engine, and all of that paid off tonight.”

Hiett beat Matthew Turner of Dawsonville, Ga., to the checkered flag by less than a half-second. Turner got within a few lengths of Hiett amid lapped traffic, but couldn’t make the pass. Boland finished third followed by Palasini and Larry Harrod of Plains, Ga.