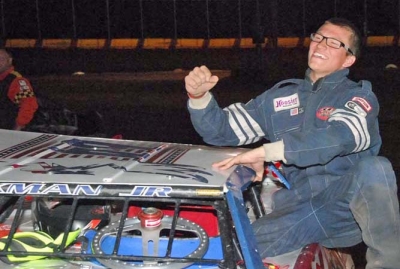 At the outset of the feature, Workman went to the high-side cushion while Wines ran the low groove. The frontrunners ran side-by-side many laps before Workman edged ahead, and lap-12 caution appeared for Brandon Biffle’s flat tire.

Wines was back to third on the restart, but he regained second from Moore and again began a duel up front with Workman. He slipped behind Moore again before. Cody Sell got into the wall in turns three and four to halt the race briefly.

Wines went to work again on the restart, at one point clearing Workman briefly. But the 19-year-old Workman worked back ahead and completed his biggest career victory.

Notes: Workman’s No. 64 is sponsored by topohillrv.com. ... The series is presented by Sherwin-Williams automotive finishes. ... The Greg Biffle Foundation sponsored the night’s action, and the NASCAR driver was on hand during a rare off-weekend. ... Fast qualifier Brandon Biffle drove the backup car of Greg Walters. ... Terry Ferrando’s 15th-to-ninth run made him the hard charger. ... Next up for DAA Northwest tour competitors is a July 31 event at Willamette Speedway in Lebanon, Ore.