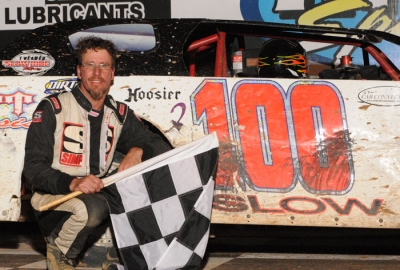 “Sometimes it's better to be lucky than good,” the outside front-row starter said. "We have struggled all year to get a hold of these new tires, and we have not run well. We've also lost a few due to technicalities. We'll take this one tonight.”

Scott led the first lap before Pegher went ahead, and Blair dropped Scott to third on the sixth lap. Blair chased Pegher and closed in when the leader battled through heavy traffic just past the race’s midpoint.

On the 23rd lap, Pegher and Blair ran three-wide with the lapped car of Joe Martin exiting turn two. Pegher stayed up front, but heading into turn two on the next lap, Blair tagged the rear quarterpanel of Pegher's car, sending him spinning.

Blair immediately slowed with the caution in the air. Officials sent Blair to the rear, but he ended up heading for the pits after Pegher drove the wrong way around the track during the caution period, sideswiping Blair's car on the frontstretch. Pegher was disqualified.

Scott emerged as the lead and led the final two laps. Dan Angelicchio took second from Jim Frank and took a shot at Scott in turn four on the last lap, but settled for second. Kyle Lukon, Butch Lambert and series points leader Max Blair rounded out the top five while Frank ended up sixth.