Walters leads all the way in Sunset's 100-lapper 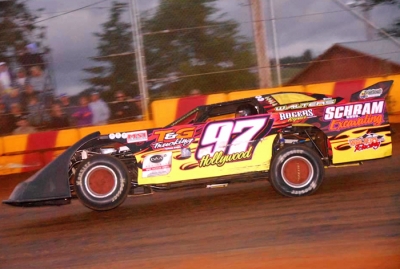 BANKS, Ore. (July 3-4) — Outside front-row starter Greg Walters led every lap of the Firecracker 100 at Sunset Speedway for a victory on the DAA Northwest Crate Late Model Series. The hometown driver leads the points on the first-year series.

Notes: Walters is sponsored by T&G Trucking and Schram Excavating. ... The series is sponsored by Sherwin-Williams. ... Two minor cautions slowed the first half of the 100-lapper. ... At the midway break, the track was lightly watered but no work was allowed on the race cars. ... Fast qualifier was involved in two cautions, spinning on lap 53 to collect Brett James and getting together gain with James exiting turn four on lap 82. ... Robby Ireland and Bob Trout were knocked out of the race for a lap-55 accident on the frontstretch that also included Darvin Trammel. ... Kris Pickle barrel-rolled on the frontstretch of Saturday’s first heat race. He wasn’t seriously injured by destroyed his Swartz Race Car. ... The series added a July 16 event at Grays Harbor Raceway in Elma, Wash. Series co-founder and NASCAR star Greg Biffle is expected to be on hand. ... The next series event is scheduled for July 10 at Coos Bay (Ore.) Speedway.