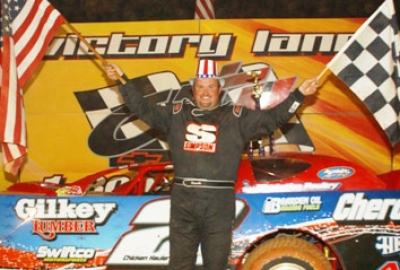 GASTONIA, N.C. (July 2) — Dennis Franklin of Gaffney, S.C., rallied from his 11th starting spot Friday at Carolina Speedway for an NDRA Road Show victory. The Crate Late Model special married by a 17-car pileup paid $2,000 to the winner as he took the checkers a half-track ahead of the field.

Ron Parker of Bellwood, N.C., was second followed by Jason Pack of Shelby, N.C., and polesitter Gary Puckett of Charlotte, N.C. G.R. Smith of Shelby, N.C., rounded out the top five. The 17-car pileup in turns one and two was one of several multicar accidents in the main event, and Jeff Cooke was among drivers involved in more than one caution.