Boland rallies from 15th for victory at Whynot 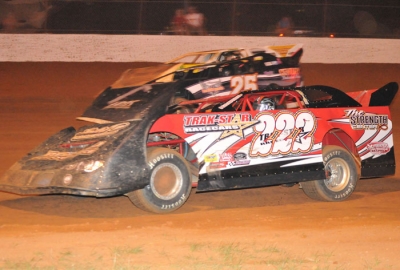 MERIDIAN, Miss. (June 26) — Mike Boland of Cuba, Ala., charged his way through the field to win the Coca-Cola Classic 50 for the NeSmith Chevrolet Dirt Late Model Series on Saturday night at Whynot Motorsports Park. Boland started 15th, took the lead on lap 38, and checked out to post his eighth career win with the series.

Boland, the GM Performance Parts Hard Charger, and beat his teammate Cliff Williams of Star, Miss., to the checkered flag by almost two seconds. En route to the victory, Boland dodged a bullet on lap 15 when he was in the middle of a 12-car pileup. Boland made a hard right at the pit entrance in turn four to miss the melee.

“The Lord really blessed us tonight when we got through the wreck in turn four,” Boland said. “The track was good tonight with multiple racing grooves which was what we needed starting as far back as we did. I was a little concerned we were going to have a good night starting 15th, but everything seemed to go our way.”

Another pair of teammates took the third and fourth spots with Ronny Lee Hollingsworth of Northport, Ala., and defending series champ Eric Cooley of Fulton, Miss. Matthew Turner of Dawsonville, Ga., was fifth and trails Cooley in the series standings by 46 points.ï¿½ Justin McRee of Tuscaloosa, Ala., the previous night’s winner at Whynot, was sixth.