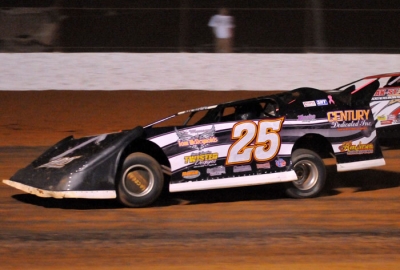 MERIDIAN, Miss. (June 25) — Justin McRee of Tuscaloosa, Ala., rode the high line to his first NeSmith Chevrolet Dirt Late Model Series victory of the season on Friday to open the Coca-Cola Nationals in the Dasani Water 40 at Whynot Motorsports Park.

McRee led a total of 21 laps in an exciting side-by-side duel with Mike Boland of Cuba, Ala., who made strong challenges for the point on both the inside and outside grooves, and even led one lap. But McRee got to the checkered flag first while Boland had to settle for second place.

McRee went from third to first on a lap-19 restart on his cushion-riding run to victory.

“I lifted my visor up during a caution flag and took a good look at the high side of the track,” McRee said. “I saw enough moisture in the clay up there, and the way it worked out, I restarted on the outside, and we were fast up there when the green flag came back out to take the lead.”

Hometown driver Larry Murphy finished third while 2008 series champ Chip Brindle of Chatsworth, Ga., was fourth. Ronny Lee Hollingsworth of Northport, Ala., rounded out the top five. Larry Harrod of Plains, Ga., led the first 18 laps but got tangled up with a lapped car and spun into the backstretch wall.