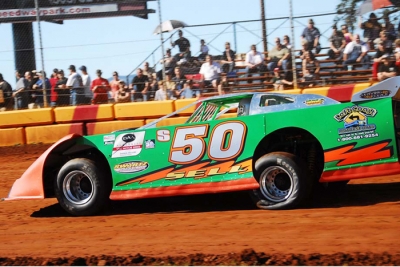 Jason Wines of Lebanon, Ore., rallied from 13th to finish second in the feature slowed by seven cautions. The checkered flag appeared along with the final yellow when the event surpassed the 11 p.m. curfew.

Hometown driver Greg Walters, who started 10th, was third while Brady Sell of Brownsville and Jimmy Schram of Vancouver, Wash., rounded out the top five.

Brady Sell was actually involved in the final caution when he tangled with Jerry Schram in turn one, but he was credited with fourth. Schram, who ran second the first half of the race, was listed 15th.

Among the cautions was a multicar accident on the second attempted start involved Jeff Biffle, Robby Ireland, Brett James and Steve Suckow. Biffle’s race ended on the 26th lap when he got into the frontstretch wall.