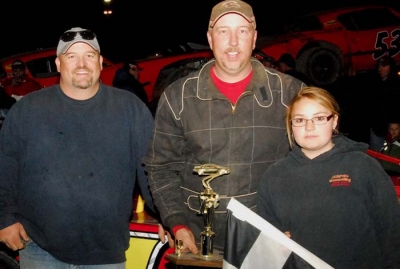 Dash winner Greg Walters of Banks, Ore., who started eighth after an inversion, rallied to finish second but never seriously challenged Wines. Moore ended up third in the race on a dry-slick, dusty surface.

Two cautions slowed the action, first for Brady Sell's turn-four spin on the second lap and later for a slowing Kris Pickle.

Notes: Wines drives a Kartco Racing No. 41. ... The series is also sponsored by Sherwin-Williams. ... Series officials could not get timing lights to work, so heat race lineups were determined by pill draw. ... The series moves to Willamette Speedway on May 22.